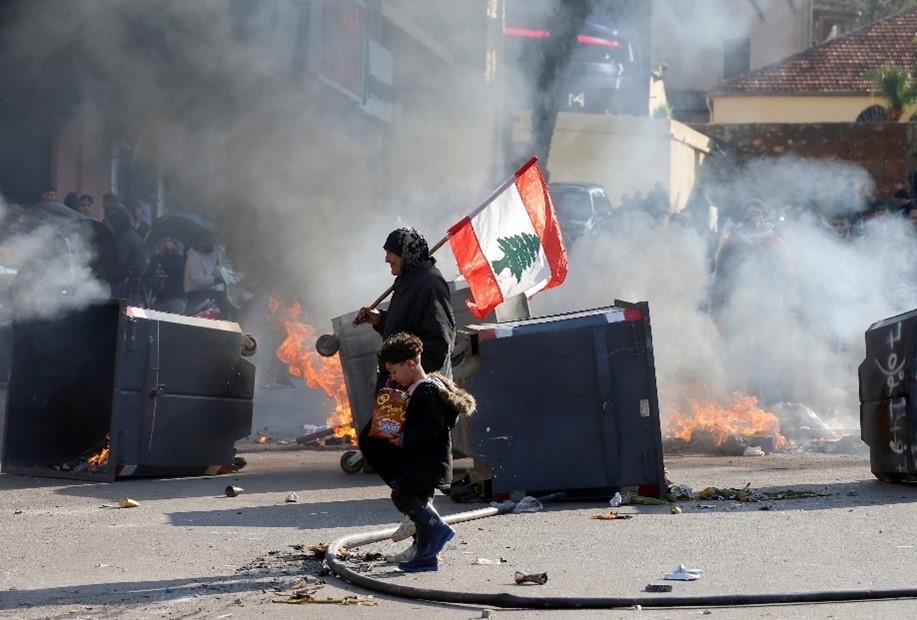 While the scale of oversea migration from Lebanon to Cyprus remains relatively limited compared to other Mediterranean routes, the number of would-be migrants attempting the crossing has surged since Lebanon fell into an ongoing economic and political crisis beginning in late 2019.

According to data provided by the United Nations Refugee Agency (UNHCR), some 1,162 migrants — the vast majority of them Syrian refugees, with smaller numbers of Lebanese citizens, Palestinian refugees and other nationalities — attempted to reach Cyprus by sea from Lebanon between January 2020 and the beginning of June 2021, with 414 of those departing in 2021.
By comparison, a total of 290 people were recorded as attempting the journey in 2019 and 490 in 2018. In terms of the number of boats departing, there were 17 vessels recorded in 2019 and 21 in 2018, while in the period of July to October 2020 alone, some 30 boat departures from Lebanon were reported.

While the numbers attempting the sea crossing have increased, the majority of would-be migrants did not make it to Cyprus: of those who have departed since January 2020, UNHCR reports reveal that only about one-third of them had successfully landed. The others were either intercepted by Lebanese authorities before reaching international waters, turned back by Cypriot authorities, drifted to Syria, or ran into trouble and were rescued at sea. Thirteen people died trying to make the journey.

While the numbers have grown over the past two years, human smuggling from Lebanon is not a new phenomenon. At least as far back as 1999, Cypriot authorities were complaining of migrants entering the country illegally by sea from Lebanon.

In the impoverished city of Tripoli in north Lebanon, in particular, young men and families have long seen the sea route as a way out of their circumstances, sometimes with tragic consequences. In 2018, five-year-old Khaled Nijmeh, the son of a Palestinian mother and Syrian father living in Lebanon, drowned after the overcrowded smuggler boat the family had boarded capsized en route from Lebanon to Cyprus.

While it is the stories of tragedy that usually make the news, last summer when I interviewed a number of young people in Tripoli who were contemplating the journey, all of them knew or had heard of people who had successfully made the journey to Europe via smuggling.

Some had even done it themselves, like 27-year-old Ahmad Harouq from Tripoli’s Bab al-Tabbaneh neighbourhood, who told me he had made his way to Europe in 2015. Rather than going via sea to Cyprus, Harouq had flown to Turkey and then bought a spot on a smuggler vessel headed to Greece. From there, he said, he had gone overland to Germany and finally Sweden. There, he applied for asylum but was eventually rejected and sent back to Lebanon. Despite that experience, Harouq said he was thinking of trying again, possibly by way of Cyprus.
“I decided to leave [Lebanon] because the situation wasn’t good, and until now it’s not good,” he said.

In fact, the situation is now considerably worse, with some 55% of Lebanese estimated to be living below the poverty line and 89% of Syrian refugees below the extreme poverty line in 2020. The existing financial crisis has been further exacerbated by the COVID-19 pandemic and the August 2020 Beirut port explosion, which killed more than 200 people, wounded thousands and displaced as many as 300,000, at least temporarily, from their homes.

UNHCR said in a statement that from its staff’s interviews with would-be migrants who were intercepted, rescued or returned to Lebanon, “it is evident that these are desperate journeys undertaken by people who see no way of survival in Lebanon as the socio-economic situation is continuously worsening.”

The main reasons they cited for leaving, the agency said, were “inability to survive in Lebanon due to the deteriorating economic situation, lack of access to basic services and limited job opportunities in Lebanon, [and] having relatives or community members in Cyprus.”

Who Is Attempting the Journey?

In a letter addressed to Council of Europe (CoE) Commissioner for Human Rights Dunja Mijatović in March 2021, Cypriot Interior Minister Nicos Nouris said that 472 migrants had landed on the shores of Cyprus in 2020, of whom 400 were Syrian and 72 Lebanese. Another 210 Lebanese who had attempted to land were sent back because they said their intended final destination was Italy, not Cyprus, he added. Euromed Rights reported that of the would-be migrants who had attempted to leave Lebanon for Cyprus by boat, some 20% were Lebanese citizens and the rest primarily Syrians.

While the journeys are largely driven by economic desperation, the irony is that this route is largely out of reach for the poorest of the poor. According to interviews I conducted in Tripoli, before the Beirut port explosion, smugglers were charging around $1,000 per person for the trip, to be paid in US dollars (USD), while a Lebanese citizen who made the trip in September said he had paid in Lebanese lira the equivalent of $1,500 at the black-market exchange rate at the time. A Syrian refugee who attempted the journey in November said he had been charged $2,500 in USD; however, in his case, the would-be smuggler had disappeared after receiving a $500 deposit.

These amounts are out of reach for the majority of Lebanese and certainly for most Syrian and Palestinian refugees in Lebanon. Those I spoke to who had made or attempted to make the trip had borrowed money or sold household items, such as furniture, and valuables like gold and, in one case, a laptop.

Two young Lebanese men who I interviewed last summer as they were preparing to make the trip were a university student and a recent graduate discouraged by the lack of opportunities in Lebanon. Like many migrants coming from Lebanon, these young men saw Cyprus as a way station en route to mainland Europe. For others it is the intended final destination; as in the case of Shamseddine al-Kerdli, a Lebanese barber from Tripoli who arrived in Cyprus with his three children in September. Kerdli said he had multiple family connections in Cyprus, including an older brother who had been living there for more than 20 years and had taken the Cypriot nationality.

“I don’t need anything from anyone – my siblings are there,” Kerdli said. Nevertheless, after spending a few days in a crowded reception centre upon their arrival, he and his children were sent back to Lebanon.

Amid the surge in smuggler boats arriving in the summer and fall of 2020, Cypriot authorities began to carry out a policy of forcibly pushing vessels back before they could reach the shore, a policy that has been sharply criticized by human rights groups. Human Rights Watch reported that Cypriot coast guard patrols had “summarily pushed back, abandoned, expelled or returned more than 200 migrants, refugees, and asylum seekers coming from Lebanon during the first week of September 2020 without giving them the opportunity to lodge asylum claims.” In some cases, the report stated, coast guard vessels tried to prevent smuggler boats from landing by brandishing weapons and circling their vessels at high speed to create waves; in one case, a coast guard vessel rammed a wooden boat full of migrants. Others were allowed to disembark but later were loaded on boats and sent back to Lebanon without having the chance to lodge asylum claims.

The CoE Commissioner for Human Rights has also raised concerns about the pushbacks, noting that “when persons at the border are returned without individual identification or procedure, Member States cannot establish whether they may be sending them back to human rights abuses. This may lead to violations of Article 3 of the European Convention on Human Rights (ECHR) and the UN Refugee convention. Moreover, collective expulsions of migrants are prohibited under Article 4 of Protocol 4 to the ECHR and as such, cannot be tolerated.”

The Cypriot Interior Minister, in his response, noted that the country is “facing huge challenges concerning arrivals of irregular migrants on the island,” both by sea and over land from Turkish-controlled northern Cyprus, with some 4% of the population now being asylum seekers and protection holders. However, he maintained that the migrants who were sent back had not requested international protection.

Increased Efforts to Stop the Departures

It appears that, at least in some cases, Lebanese authorities have looked the other way and allowed smuggler boats to depart. Kerdli recalled that the boat he crossed in had encountered a Lebanese Army marine patrol that ultimately let them go.

“I told them, ‘The President told us: if you don’t like the situation, leave. Well, we’re leaving,’” Kerdli recalled, referring to a controversial November 2019 speech by Lebanese President Michel Aoun in which he suggested that protesters should emigrate.

However, Lebanese authorities appear to have stepped up efforts to stop smuggler boats from leaving Lebanese waters since Cypriot and Lebanese authorities met in October 2020 to discuss a readmission agreement for irregular migrants, with promises to “swiftly turn away boats proven to have left Lebanon and send them back to where they have departed from.”
In the spring of 2021, the Lebanese Army and Internal Security Forces have regularly issued communiqués announcing that they have stopped smuggler boats, mainly carrying Syrians, from leaving Lebanese waters.

On June 1, Lebanese General Security reportedly deported 15 Syrian refugees, including five who had tried to reach Cyprus by sea but had been turned back by Syrian authorities. Human rights groups monitoring the case said that upon being returned to Lebanon, all 56 passengers on the boat had been detained by General Security. Most were released, but five who had entered Lebanon after April 24, 2019 were deported to Syria, with Lebanese authorities citing a decision by the country’s Higher Defense Council authorizing deportation of Syrians who had entered the country irregularly after that date.

Corina Drousiotou, a coordinator and senior legal advisor with the Cyprus Refugee Council, noted that the number of boats arriving from Lebanon appears to have dropped off since last year.

“I think the pushbacks had an impact on it and I think there’s been a lot of pressure put on Lebanese authorities to make sure that they stop them,” she said.
She also noted that, while Syrian refugees would generally be granted asylum if they did succeed in arriving, the journey has fewer clear benefits for Lebanese migrants and even for Palestinians.
“Everyone should be given access to the asylum procedures,” she said. “…But if they’re fleeing for financial reasons they will be rejected. I consider it a shame for them to endanger their lives and their families’ lives and pay so much money for something that’s not going to end in finding a solution for their situation.”