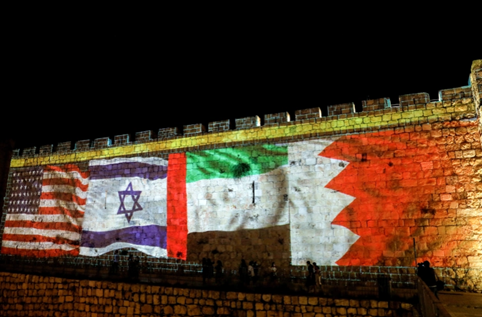 Late 2020 and early 2021 witnessed a flurry of agreements between Israel and Arab states. The so-called Abraham Accords were signed between Israel and the UAE and Bahrain, respectively, in September 2020, while Sudan reached a settlement a month later. In January 2021, Morocco followed suit, leading to twice the number of Arab countries signing formal accords, as compared with the previous 73 years since Israel’s founding. These normalization agreements were officially greeted with much fanfare, including cultural and business exchanges, but how are they viewed by ordinary citizens living across the region?

The Arab Barometer is a nonpartisan research network giving voice to ordinary citizens across the Middle East and North Africa (MENA). It is the largest and longest-standing project of its kind in the region. In 2018-19, shortly before the normalization agreements, the Arab Barometer surveyed citizens across 12 MENA countries, including more than 80 percent of the region’s citizens. The results reveal that few are in favour of rapprochement with Israel. When asked if it is a good thing that some Arab countries have started coordinating their foreign policies with Israel, a third or fewer said this development was good or very good in all countries surveyed, ranging from 32 percent in Sudan to just five percent in Yemen. This view is held consistently across most key demographics, with no meaningful differences by age, gender, or income in most countries.

Yet, Israel’s neighbours also tend to be the countries where publics are somewhat more likely to say it is good that some Arab countries are coordinating their foreign policies with Israel. In Palestine, 24 percent hold this view, while 23 percent do in Egypt, 19 percent in Lebanon, and 14 percent in Jordan. Meanwhile, those in the Maghreb are less likely to believe this strategy is beneficial, including just 13 percent in Morocco, 12 percent in Algeria and 9 percent in Tunisia and Libya, respectively.

Israel as a Strategic Threat

When asked about which country posed the greatest threat to stability in one’s country, Israel is listed more often than any other country across the region.

Again, this view is particularly widespread in Israel’s neighbours. Overall, 79 percent in Lebanon, 63 percent in Palestine, 54 percent in Egypt and 42 percent in Jordan name Israel as the biggest threat to stability in their country. However, in countries that are further removed, such as those in North Africa, Israel is listed far less frequently. In Morocco (27 percent), Algeria (21 percent) and Algeria (21 percent) citizens are far less likely to name Israel as the primary threat to their country’s stability.

Views about the threat Israel represents do appear to be changing in certain countries, however. In Egypt, youth aged 18-29 are significantly less likely (-8 points) to say Israel represents the primary threat to their country’s stability than older Egyptians. An even larger gap exists in Jordan (-17 points), while five-point gaps are also found in Morocco and Iraq, respectively. A key exception, however, is Palestine, where youth aged 18-29 are ten points more likely to say Israel represents the greatest threat compared with those who are older.
These results imply that on the eve of the Abraham Accords, views of Israel were overwhelmingly negative. Few Arab citizens, regardless of age or geography, held positive views towards Israel or wanted to strengthen relations with the country. Instead, most Arab publics viewed Israel through a strategic lens. Those who live in bordering countries were deeply worried about Israel as a security threat, but were also more likely to favour engagement with their neighbour out of strategic necessity. Israel represents a reality they must coexist with, and their publics were somewhat more likely to want coordination to address this perceived threat to their security. Meanwhile, those living in countries farther removed are less likely to see Israel as a key security threat and thus appear less likely to see a logical reason for direct engagement.

Views of the Abraham Accords

After the normalization agreements between Israel and the UAE and Bahrain, respectively, the Arab Barometer surveyed seven Arab countries – Morocco, Algeria, Tunisia, Libya, Jordan, Iraq and Lebanon – about their views towards the normalization agreements between the UAE and Israel and Bahrain and Israel. Given the long-standing hostility towards Israel, it follows that the attitudes of ordinary citizens were highly unfavourable towards these accords. Of the seven countries surveyed, only in Lebanon and Iraq did more than 10 percent say they favoured or strongly favoured these agreements. Elsewhere, favourability toward the Abraham Accords was just 9 percent in Morocco and Algeria, 8 percent in Tunisia, 7 percent in Libya and 3 percent in Jordan.

In Lebanon, 20 percent of citizens support these agreements. However, this support is primarily driven by the country’s Christian population. Half of Christians in Lebanon are in favour of the Abraham Accords, while members of the country’s other main sects – Sunnis (6 percent), Shias (less than 1 percent), and Druze (11 percent) – hold attitudes similar to Arab citizens in the other countries, where fewer than one-in-ten favour these agreements. Levels of support among Christians are likely driven by the strong association between former US President Donald Trump and the Accords. Trump is relatively popular among Lebanese Christians, with 44 percent having favourable views of his policies toward MENA, compared with fewer than 10 percent for the other main sects.
The second exception is Iraq, where 24 percent are in favour of the Abraham Accords. Again, however, there are major differences within communities in Iraq. Among the Kurdish community, a full 48 percent favour these agreements, compared with just 19 percent of the Arab population. Given the relatively strong economic links between Israel and the Kurdish region of Iraq, it is unsurprising that Kurds are more likely to view Israel favourably relative to other citizens. So, while Iraqis are somewhat more willing to support this normalization process than other countries surveyed, there remains a stark divide by ethnicity within the country.

Support for Normalization between Morocco and Israel

As with the Abraham Accords, support is divided in Lebanon and Iraq within different communities. In Lebanon, support remains significantly higher among Christians (32 percent) than among other sects, where support does not exceed 10 percent. In Iraq, support remains highest among Kurds (47 percent) compared with just 16 percent of Arab citizens.
However, by far the most important exception is Morocco itself. Overall, 41 percent of citizens say they favour or strongly favour their country’s normalization agreement with Israel, which is 32 points higher than for the Abraham Accords. To a large extent, this shift can be explained by the fact that in the wake of announcing the agreement, the US officially recognized Morocco’s territorial claim over Western Sahara. Although not legally binding internationally, having US backing is a major step towards the formal legitimation of this long-standing Moroccan ambition. As a result of this trade-off, citizens appear to have significantly warmed to the idea of peace with Israel.

Throughout the Arab Middle East, Israel remains overwhelmingly unpopular. Even in Egypt and Jordan, countries with long-standing peace agreements with Israel, the peace remains cold, with most citizens in these countries rejecting closer relations with Israel and continuing to see Israel as the greatest threat to stability in their country. Given widespread sympathy for the Palestinian cause across MENA and continuing concern about Israel’s policies towards the Palestinians, it is unlikely that popular views will change dramatically as a result of the recent normalization agreements.
However, findings from the Arab Barometer make it clear that publics across MENA view relations with Israel largely through the lens of strategic interests. Although neighbouring countries are the most likely to fear Israel as a threat to stability, they also tend to be the countries that are more likely to favour greater policy coordination towards it. In other words, Israel is not popular, but does represent a reality that their governments need to address.

The differences within countries toward the recent normalization agreements paint a similar picture. Lebanese Christians, who saw their strategic interests more closely aligned with the Trump Administration, gave stronger backing to the normalization accords that took place before the US election. In surveys conducted after Joe Biden became President, support for the normalization agreement with Morocco fell as Trump receded from the world stage. Meanwhile, in Iraq, Kurds are more likely to support normalization with Israel given their long-standing links with the country.
In Morocco, despite historically low views of Israel and a rejection of the Abraham Accords, citizens appear to have clearly understood the trade-off between US recognition of Western Sahara and the country’s leaders normalizing relations. Although support for normalization itself is likely low, the resulting benefits – a much stronger legitimation of the country’s claim over Western Sahara – made citizens far more likely to favour the agreement compared with the Abraham Accords.

In sum, it is unlikely that normalization agreements with Israel will serve to win over the hearts and minds of citizens across the Arab region. Support for such agreements is likely to be tenuous and conditional, but if the tangible benefits are large enough, then citizens are likely to cautiously favour such agreements. However, if these benefits are limited or do not clearly materialize, then support is likely to be low or quickly recede. In all likelihood, over time, there will remain, at best, a cold peace between Israel and Arab citizens in MENA, especially with a peace agreement between Israel and the Palestinians becoming ever more remote.