Dancing with the Past 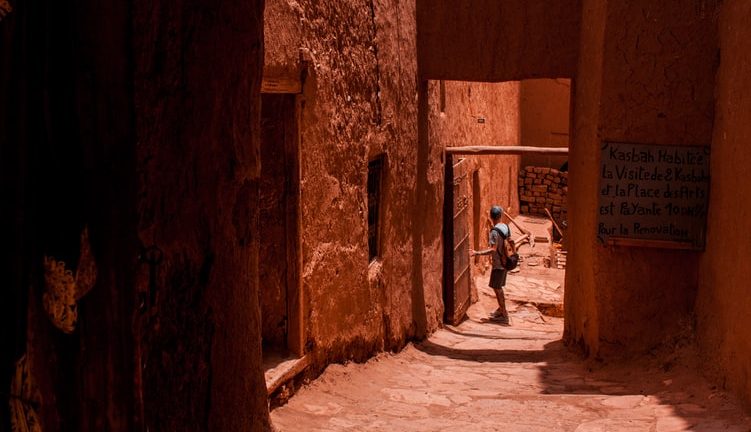 As the folk tale has it, what makes people victorious over time is not their survival in life, but their success in telling stories. It also says that even a broken clock is right twice a day.

I took in those transcendent words as if they were the scent of a tree’s consciousness reaching me from afar, or the scent of an old room where a youthful diary, full of hidden pills of despair, is stored in the mouth of Anir. A young man in his late twenties, often seen wearing a thick coat even in the hottest season, Anir says that what protects you from the cold is the same thing that protects you from the heat.

He assures me that he memorized this quote from the text of a folk tale, one of the dozens of folk tales he retained in his memory from sitting by his grandfather throughout his childhood.

I stuffed my bags with 28 years of hopes and fears, along with some jeans, a flashlight, and books I was sure would be seriously challenging to read when faced with such a strict adversary as travel. My colleagues and I got on a white bus that emitted thick, black smoke and reminded all of us of a woman who sweats sadness.

We called our enthusiastic student group the “Tree Club.” We paid for the worn-out bus’s gas and for the hotel out of our savings – savings from our already miserable college scholarship allowance. We were moved by hope, the hormones of our early 20s, and our major in Life and Earth Sciences, in the same way the wind moves leaves towards rivers in the fall: with anger, love and force. We embarked on a journey to a southern village, with more enthusiasm than willpower, to convince the locals of our project to establish a reserve for an endangered bird.

It was Anir who greeted us with his thick coat and the smile of a happy old man who continued to cry at night. He led us to the entrance of the rural hotel and was keen to personally explain the location of the only toilet in the place, which smelled of tales, mud and a raging past.

Anir believed in telling tales, and he poured them out in his drinks and his food. He never stopped telling his grandfather’s stories in houses, streets, village fields and at every get-together. His stories were not just beginnings and endings, but clear mirrors. Anyone who had just finished listening to these tales had a strong and passionate desire to touch their facial features one by one to make sure that they were still the same person they’d been before listening.

No one could deny they’d been changed. Something – a delicate, profound and deep-rooted thing changed forever through the magic his stories gently delivered, with a cleverness that made heads turn.

His tales were like a dance with the past – a playful and viscous past, and one in desperate need of someone to pat it on the shoulder and calm it down.

Anir was the only one who volunteered to do so in a village that was blinded by a touch of globalization, like a half-blind pirate on a tilted ship swaying in a tired man’s dream.

“Real men don’t cry or dance,” was what the villagers said to Anir, our guide throughout the month we spent walking from house to house to convince the residents of the advantages in making their area a natural reserve for a bird. This bird chose their village to be its home, and to be the place it lands after its fearful flight, just the way we land our aches and pains on a small pillow at the end of the day.

Anir cried, told stories and danced too. He danced with the past, in fact. Meanwhile, the villagers were busy with new TV channels, the Internet and the connection to a new era, while they ignored the evenings of stories they’d held for decades on no specific occasions. Evenings they made sure their children attended, while ignoring the dances that accompanied the narration. Evenings in which the tales slipped like pure water from paths, passageways and around corners, where the long line of their ancestors had passed and finally ended, only to begin again.

When he was five years old, Anir learned how to tell stories about life, time, treachery, hope, ascension, descent, acceptance, pleas, responses and infinite negotiations with life. Tales that had mouths that could breathe fire, whose heroes could fly, whose animals could speak and whose events would escalate in light of a great enigmatic secret. Just like a house that has many copies of its key, but we own only one.

Stories that have been told thousands of times, and that have been heard by the villagers repeatedly, but whose repetition is always welcome because the ointment of love is repeatedly welcome for use on the same bloody wound on the reckless knee of time. Anir’s folk tales were the stories of the village and the land, and the scent of existence – if it had a smell – was timeless.

His grandfather taught him how to dance like all the other members of his troupe back then, with the seriousness and professionalism of a saint listening to the confessions of his sinful visitors. Part of his grandfather’s strong-voiced group was assigned to turn the tale into rhyming Mawawil songs. These were sewn with a secret, invisible thread, discovered by the eyes and ears of the big crowd of village men, women and children who were driven by a ripening familiarity and longing for the dream of storytelling – their highest aspiration.

Another part of the band was entrusted with transforming the Mawawil into dances that mimic the movements of sickles in the field, seeds being sewn, flocks of sheep being led from one hill to another, and the motion of spinning wool, threshing wheat and kissing the tips of the plants. In short: dance movements at the center of life itself.

We progressed slowly but successfully on this project in Anir’s village when the time we set for our stay was almost up. Over the course of the month, we’d had to prepare a detailed report on the details of establishing the reserve, the necessary equipment, the geographical nature of the area, and the community’s perception of sharing a life with a free creature that loved their homeland, which it considered home as well. Things went peacefully and smoothly, but Anir’s issue stayed on my mind. To be more precise, the issue of the folk tales he still carried, which nobody else paid attention to anymore. Due to their new fascination with technology, the villagers seemed to have been kidnapped from the vast storytelling world that had always brought them together.

He told me and all the members of the Tree Club stories about women who conquered colonizers with their femininity, men who saved the lives of entire countries, and scarecrows set in fields so that neither the seeds nor the field would be harmed, as well as birds, genies, palaces, phantoms and evil people who tried in vain to muzzle the mouth of truth but could not.

Anir didn’t take a single story from his grandfather’s basket without writing “Made in the past” on it. Every time he danced for us with rare passion, he would end with a signature that spelled out victory over evil, even if it was with words. Words, for Anir, especially those originating through thousands of years of hard work and digging with the axe of love and patience, were more than mere words. They were real miracles that made him stand strong before the water of modernity globalizing the primitive bridge, which was made out of trunks from pine and olive trees and linked the two sides of the village. Modernity washed the bridge away.

The day we packed, and as I put back my books and flashlight into my bag, the thought of an empty seat on our bus came to my mind. There were nine of us, but the bus could carry ten passengers. Then I couldn’t get away from the image of Anir, with his thick coat and infinitely deep fear for his stories and dances, taking the empty seat on the bus to our city, towards the artists’ workshop affiliated with our university. This could certainly wipe the dust of forgetfulness from the surface of the heavy, precious box that Anir carried on his shoulders wherever he went.

“There is an ogre in every story, but no matter how strong it gets, it never wins unless the narrator allows it to.”

“Don’t fall into the trap of not telling your stories, this is exactly what politicians want.”

“If a hedgehog, a fox or any other animal speaks, it’s because many human beings ceased to speak at a time when they had to tell the truth.”

“Regardless of how powerful the characters in a story are, their power will not be greater than the power of a good listener.”

“I don’t tell you bedtime stories, I tell you stories for when you wake up.”

“Don’t bother yourselves with reading history books, just listen to me.”

“Whoever lives with a story for forty days becomes a story. Who can deny the story they have become?”

“My grandfather died before I got to know him very well, but the stories he left for me to inherit brought us closer to each other.”

These are some of the many phrases that I picked from the texts of the stories Anir narrated with his sad voice, like a green flute no longer played by its maker. Anir recited them in dozens of performances at artistic events held in universities, youth centers, theaters and various cities and streets, under the patronage of international and local associations that believed in candles being lit by tales in a darkness that was too often cursed in vain.

Anir found his stride, found what he was looking for, and he became a nomad moving from one city to another, pumping into the veins of city dwellers blood from stories told in whispers, shaking their views of the day before shaking their view of yesterday, and of the days before that. He carried his stories around happily and waved from afar at his old village nickname: Anir the unemployed.

We didn’t do things as we had planned at the Tree Club regarding the project of establishing a reserve in Anir’s village. The roads crossed ahead of us and things suddenly got complicated. We were swayed into technical and social labyrinths until we ended up raising the white flag for an undetermined time. But no member of the Tree Club could deny that our mission had been accomplished in some way, in a miraculous, magical way. Who could deny that a real, wonderful, free bird in danger of extinction had been saved? A storytelling bird called “Anir”.

A few days ago, he called the club’s headquarters once again to thank us for the bus that had given him a ride back from near desperation towards a difficult hope. He told me that he was putting the final touches on his new dancing-storytelling project, in cooperation with three young men from his village. He invited us to attend the show and to spend some days in the village. The opening was to be held on the threshing floor in the village, where the annual harvest takes place. Before hanging up, he also told me that the name of the show was “Real Men Cry and Dance Too”.