Women and Democracy in Post-Revolutionary Tunisia

Tunisian lawyer and human rights activist Basma Khalfaoui delivers this seminar on democracy and the role of women in Tunisia, a country that two years after the revolution that brought down Ben Ali strives to consolidate stability, progress and democracy.

During the event, which has the collaboration of the Association of European Journalists of Catalonia and the International Network of Women Journalists and Communicators, the latest issue of the magazine Quaderns de la Mediterrània, dedicated to women in the Mediterranean and with articles by some thirty collaborators is presented.

Basma Khalfaoui (Tunis, 1971) has been involved in the struggle for human rights and democracy in Tunisia since the Ben Ali regime. In the mid-1990s, she joined the General Union of Tunisian Students and the Tunisian Association of Democratic Women, from where she defended women’s rights and equal opportunities. In 1999 dhe met Shokri Belaid, who was already a left-wing political figure, and married her in 2002.

In 2012, she joined the Unified Democratic Patriots Movement (El Watad), the party with which Belaid enters the first democratically elected Tunisian parliament. On February 6, 2013, Belaid was shot dead in front of her house and Khalfaoui became the widow of the first victim of a political assassination in post-revolutionary Tunisia. 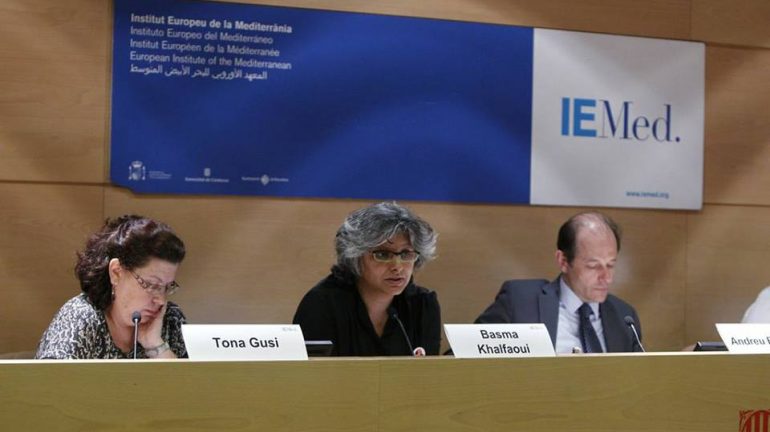