Post-Varna EU-Turkey Relations. Neither a Break-Through, nor a Break-up 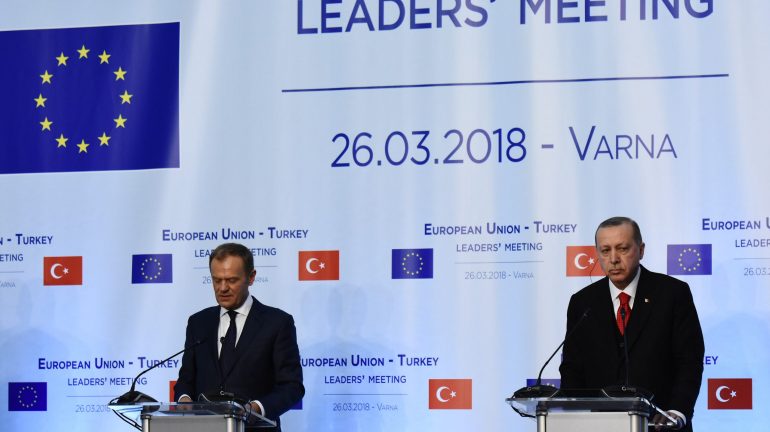 The Varna summit that took place on March 26th, 2018 did not bring any breakthrough in the EU-Turkey relationship, with neither side willing to compromise its stance on none of the numerous issues on the agenda. At the same time, however, mutual interdependence on issues such as trade and migration means that however frosty the relations may be, a divorce of this troubled political and economic marriage is not in the interest neither of Ankara, nor of Brussels.

And room for compromise there was aplenty. On the agenda were the rule of law in Turkey, fight with terrorism, migration flows, and Turkey’s involvement in Syria and in the Eastern Mediterranean and Aegean Seas. For the Turkish side, most important issues involved visa-free movement for its citizens, revival of accession talks, and an upgrade of the EU-Turkey customs union.

The list of complaints and expectations was therefore long and the talks themselves, as anticipated by Commissioner Juncker ahead of the meeting, “frank”. The most recent bone of contention was Turkey’s conflicts with Cyprus and Greece. In mid-February, an Italian oil company drill ship commissioned by the Cypriot government to explore for natural gas resources in disputed waters south-east of Cyprus was confronted by a Turkish warship. The following month, two Greek soldiers were imprisoned after trespassing onto Turkish territory near a border town of Edirne. The soldiers claim they did so unwittingly as they got lost in bad weather during a border patrol. Ankara, however, imprisoned them on suspicion of espionage (as of Sunday, April 8th, both were still under arrest). The EU called Turkey’s actions “illegal” and assured it stands united behind Cyprus and Greece.

The scandals, although by no means conducive to improvement of the relationship between Brussels and Ankara, are not likely to be of critical importance in the long term. At the very least, they should do no more harm than any of the past incidents such as Mr. Erdoğan urging German-Turkish citizens not to vote for Mrs. Merkel’s Christian Democrats or her sister Social Democratic Party in the elections to Bundestag last year. Or his calling German and Dutch leaders “Nazis” after they forbade rallies in favour of the Turkish government on their territories in March 2017.

Against all odds, three issues make this difficult marriage between Brussels and Ankara immune to divorce: migration, trade, and geopolitics. The much contested (on account of humanitarian issues) migration deal did achieve the result the EU wanted so badly – it significantly decreased the number of persons entering the Union through the Turkish border. According to the official data, as of April 2018 irregular arrivals remain 97% lower than before March 2016, when the deal came into effect. While disputes over the second tranche of the promised EUR 6 billion continue as the Member States are reluctant to foot the bill from their own pockets, and Ankara would prefer to receive the money directly as opposed to through NGOs and UN agencies, it is still deemed one of the few areas where cooperation between Turkey and the Bloc is constructive.

Similarly, although the overall volume of trade between the EU and Turkey somewhat stalled during the past two years, in 2017, Turkey was still European Union’s 5th and 6th largest trading partner in exports and imports, respectively. The EU, in turn, remains Tukey’ most important trade partner both for exports and for imports. Incidentally, upgrading the two-decades-old customs union between the two parties, determinedly sought-for by Ankara, would enhance this partnership and, as the EU 2016 study shows, be beneficial to both sides.

On top of that, Brussels is apprehensive about the Ankara-Kremlin friendship – a bumpy but enduring one, cemented by strategic interests and a shared ambivalent approach towards democratic and liberal values . Conclusively cutting the accession talks could push the country directly into Mr. Putin’s arms and deprive the EU of the remaining diplomatic leverage it still possesses.

Both sides have therefore a lot to lose should the accession negotiations be definitely broken. However, for the EU leaders one more important factor needs to be taken into consideration, and that is the opinion of their voters. Numerous studies show that the EU public on average is not favourable towards Turkey’s membership. Back in 2012, half of Europeans were against Turkey’s accession. Immediately after the failed coup d’etat of 15 July 2016, Turkey was even less welcome to the EU than Russia. Especially hostile towards Tukey’s membership were Germans with 81% of them rejecting the idea; in late 2017, another poll put that number at 74%.

With those numbers in mind it might be cautiously argued that for the EU leaders it is to a certain extent convenient that Turkey has been behaving the way it did, as it provides a good excuse for the lack of progress of the membership negotiations. However, as Mr. Tusk himself once famously noted during Brexit negotiations, one cannot eat a cake and have a cake. With the next EU-Turkey summit expected to take place in June, both sides have some time to evaluate their positions. In the meantime, Mr. Erdoğan should refrain from engaging in more conflicts with the Member States and release journalists and at least some of the other post-coup detainees from prisons. Messrs. Tusk and Junker on their part could do more to offer a realistic customs-union upgrade process and, to amplify the message, perhaps a less burdensome visa regime for business purposes. This may not be enough to upgrade the temperature of the mutual relationship from frosty to cordial, but it would be a first step towards its normalization.