How Can the EU Border be Better Managed? 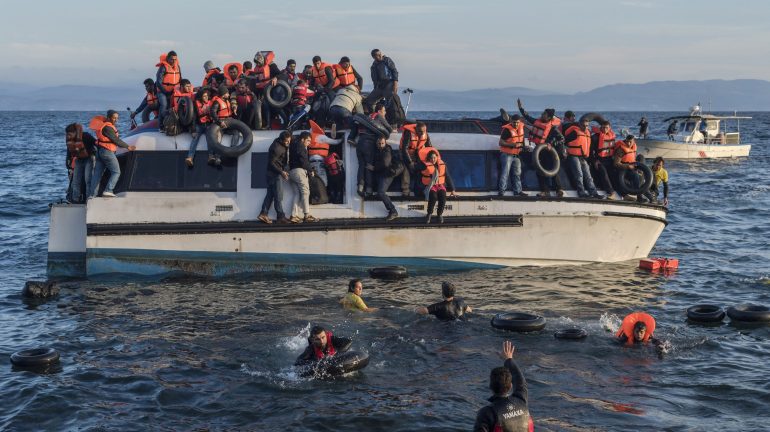 During the first decade of the 21st century, the Euro-Mediterranean border had witnessed the constant arrival of irregular migrants to its eastern, central and western areas. The traditional South-North migratory flows remained constant, while some countries of the southern and eastern shore of Mediterranean such as Morocco, Tunisia or Turkey experienced an economic development sufficient enough to attract immigration, although they were still participating in emigration. Furthermore, their geographical situation had turned these countries into areas where migrants from outside the region congregated, since the transit towards the North, crossing the Mediterranean, had become increasingly difficult.

Over those years, migration and refugee governance prioritised the fight against irregular migration and the consolidation of “Fortress Europe”, characterised by the implementation of restrictive measures such as common border patrols, harmonisation of deportation proceedings, and more funding for the control of the exterior borders (Alscher, 2005).

By the first half of the decade, the externalisation of border controls (Wolff, 2015) and migration policies was developed with the aim of restraining the movement of people, using a security-based and reactive approach (Aubarell, Zapata-Barrero & Aragall, 2009). In fact, the disproportionate focus on irregular migration is the result of integrating it into the security discourse; what has become known as the securitisation of migrations (Triandafyllidou & Dimitriadi, 2014). This discourse, which has its causes in the political and social movements refusing the arrival of immigrants, identifies migration as a “threat” and therefore has political implications since it has shaped the political debate, both at EU level and member state level.

This was the context and the prevalent discourse, when the humanitarian crisis started, as the result of the outbreak of the war in Syria and the destabilisation of the region. Both elements spread a wave of refugees across the region. Only in the case of Syria, 4 million people who left the country to find shelter in the surrounding countries have been added to the 6.5 million internal displaced people: 600,000 in Jordan, 2.5 million in Turkey and 1 million in Lebanon (United Nations High Commissioner for Refugees [UNHCR, n.d.a]). Most of these refugees are living outside camps, and therefore onward travel in the search for effective protection is expected.

Most of these people have reached the EU shores after a dangerous journey. This flow is one of the most important displacements of people entering Europe since World War Two. The 2015 crisis is a continuation and intensification of a longer-standing history of precarious migration to the EU (Squire, Stevens, Vaughan-Williams, Dimitriadi, Pisani, Agolli & Dal Zotto, 2015). In this respect, according to data from Frontex, over the last 5 years, from 2011 to 2014, the number of people crossing the Mediterranean was around 400,000 (60% in 2014). In addition, the danger of the sea crossing is illustrated by the upsetting number of casualties. During this 5-year period, 6,100 people died trying to reach Europe, while 3,770 people lost their lives in 2015 (Squire, Stevens, Vaughan-Williams, Dimitriadi, Pisani, Agolli & Dal Zotto, 2015).

Adding to this precarious situation, the destabilisation of Libya has brought about a further increase in migration flows from Sub-Saharan Africa, mainly caused by conflicts in African countries such as Somalia or Eritrea. These flows were mainly focused in the Central Mediterranean corridor. However, it seems that they have redirected lately towards the Eastern corridor. The UNHCR has detected that a small but growing number of individuals from South West Asia, North Africa and West Africa are also moving along the same route, among them people from Pakistan, Iran, Bangladesh, Morocco, Democratic Republic of Congo and Nigeria.

This means that the sea crossings have increased to an unprecedented number triggering a humanitarian crisis. Following a first wave of solidarity towards refugees arriving after a thousand-kilometre long journey, the debate has turned towards the capability of governments to cope with this crisis, and provide effective protection to refugees, both at destination and in transit countries. Meanwhile, there are growing concerns on how to manage mixed flows when the border between asylum seekers escaping wars and irregular migrants is getting blurred.

For the year 2016, the UNHCR predicts yet another one million refugees and migrants using the Eastern corridor (UNHCR, 2016a) particularly affecting Greece and Western Balkan routes. The central element here will be the scope of secondary movements from Turkey. That is, the onward travel from Turkey to Greece. This forecast is at present confirmed, since 60,000 people arrived in Greece during the first 30 days of the year (UNHCR, 2016b).

This brief aims to take stock of proposals for the EU to effectively manage a million entries per year, differentiate those that are unauthorised and at the same time guarantee and fulfil the refugee protection and migrant rights and integrity (Hernández-Castro, 2009). Reconciling effectiveness and ethics in migration controls and refugee protection requires a broad scope of action, implementing regionally coordinated policies and being global in their outlook as well as in the assessment of their probable impacts (Squire, Stevens, Vaughan-Williams, Dimitriadi, Pisani, Agolli & Dal Zotto, 2015).

In the present situation, measures aimed at preventing entry can be found in the European Migration Agenda (EAM) adopted by the European Commission in May 2015, which has been conceived to establish the priorities of migration, asylum and border policies for the coming years (see Table 1). It takes into account the present crisis, particularly south-eastern land borders and the Mediterranean, and combines internal and external agenda, establishing a common action between the Council, the EEAS and the Commission.

After several months, one of the most demanding programmes to be developed, the relocation system, was still far from being implemented. Only 184 out of the 160,000 asylum seekers had been relocated (Carrera, Blockmans, Gros, & Guild, 2015). Yet, these measures were conceived when the magnitude of the flows was lesser. The current scale obliges us to rethink present programmes and update them to its present dimension. No action in this direction will imply a serious lack of institutional commitment to ensure basic protection of refugees.

The point at stake is therefore to make a bigger effort to reduce unauthorised entries. This could possibly help to ensure that people arriving could be qualified as asylum seekers, while also assisting migrants that are not considered refugees.

Measures proposed by the Regional Refugee and Migrant Response Plan for Europe – RMRP (UNHCR, 2016a) (see Table 2) can be a useful tool to update the policies and programmes previously described, since they take into account the present dynamics of the movements of people, and allow a quicker and more effective response.

As previously mentioned, the present crisis is rapidly placing protection of refugees in a secondary position. It is important to note that there is still a growing number of registered entries ‒ 62,397 arrivals by sea in January 2016 according to UNHCR data (UNHCR, n.d.b) ‒ and their consequent onward movements towards destination countries in the EU through the Balkans route. Meanwhile, transit countries on this route (FYROM, Serbia, Croatia, Slovenia) experienced a growing rejection and hostile reactions towards refugees, including restriction based on nationality, deportations to neighbouring country borders and detentions of undocumented people (UNHCR, 2016b); therefore, today protection and humanitarian assistance is not always secured. At the same time, traditional receiving countries such as Sweden, Denmark, and Germany are tightening asylum procedures, closing borders or even planning to expel rejected asylum seekers. Finally, the EU Commission is putting pressure on Greece (European Commission [EC], 2016) as a frontline state in charge of the surveillance of the external EU border.

Broadening the legal asylum access is one of the possible measures aiming at effective protection. Improving procedures to asylum access goes through better management in areas such as registration, relocation and improving assistance capacity (see Table 3). These measures require close collaboration of EU agencies and institutions with international organisations already operating in the area (mainly UNHCR and IOM). They provide a set of specific measures to ensure coherent and predictable measures that could improve the present protection status of refugees and asylum seekers.

There is also an important element to be added concerning protection: the coordinated return by Frontex and member states, for those people who are considered not in need of protection. It is a key point, since this category includes an important number of people that, due to the lack registration facilities upon arrival, have not applied for asylum (in 2015, only 56% of refugees entering Greece were registered by local authorities [Traugott, 2015]), therefore they are not considered asylum seekers.

The EU Temporary Protection Directive (European Commission, 2001) provides a political tool that could be activated by the European Council. This Directive establishes an “exceptional scheme to offer refugees immediate protection,” and “minimum standards for giving temporary protection in the event of a mass influx of displaced persons” and could be a solution to avoid an unsecure return to the transit country from where they came, and at the same time provide a temporary legal status.

For those not eligible for asylum protection, the return process should be secured. The EU Action Plan on return (European Commission, 2015) foresees the setting up of the Frontex Rapid Return Intervention Teams, designed after the hotspots experience. In the present humanitarian crisis, it has to be ensured that the effectiveness of the EU system to return irregular migrants is compliant with international human rights standards.

To this aim, there are existing policy initiatives between the EU and third countries (see Table 4) in the region that should be taken into account when designing the tasks, tools and agreements with third-country counterparts.

The combination of these policy recommendations should help balance EU control strategies with actions devoted to refugee protection. In other words, they should minimise risks of people on the move and at the same time maximise the proper attention and protection for those people forced to escape from war and other violent contexts occurring in our neighbouring regions.

Aubarell, G., Zapata-Barrero, R., & Aragall, X. (2009). New Directions of National Immigration Policies: The Development of the External Dimension and its Relationship with the Euro-Mediterranean Process. EuroMeSCo Paper 79. Retrieved from http://www.euromesco.net/index.php?option=com_content&view=article&id=1156%3Apaper-79-new-directions-of-national-immigration-policies-the-development-of-the-external-dimension-and-its-relationship-with-the-euro-mediterranean-process&catid=102%3Aprevious-papers&Itemid=102&lang=en

Triandafyllidou, A., & Dimitriadi, A. (2014, May). Governing Irregular Migration and Asylum at the Borders of Europe: between Efficiency and Protection. Istituto Affari Internazionali, Imagining Europe, 6. Retrieved from http://www.iai.it/sites/default/files/ImaginingEurope_06.pdf 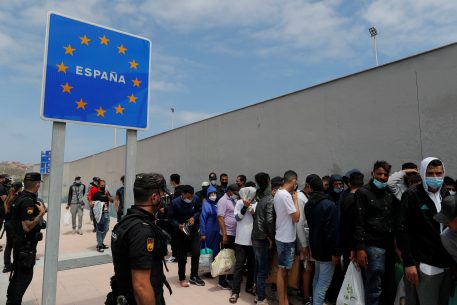 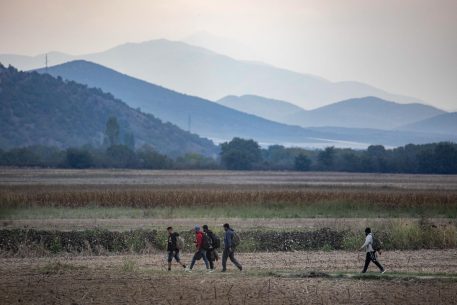