The 15th edition of the International Forum of Realities, which this year is entitled “The Mediterranean of tomorrow: issues and challenges”, analyzes the situation of the southern and eastern shores of the Mediterranean after the Arab Spring. The forum aims to identify political and economic challenges for the future in the region with local political and economic figures, representatives of international institutions and bodies, and academics. It has the participation of Andreu Bassols, Director General of the IEMed, and Senén Florensa, Secretary of Foreign Affairs of the Generalitat de Catalunya.

Bassols explains at the inauguration of the forum that the Arab Spring has given rise and is setting up a new political space in the Mediterranean where, despite the specific historical and cultural particularities of each country, common demands by the peoples come together. Among other things, greater participation in public life, more transparency and justice in the functioning of the state, an end to corruption and nepotism, as well as a more equitable distribution of wealth and opportunities. 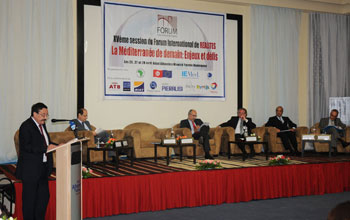