Towards a Strong, Inclusive and Transnational Women’s Rights Movement in the Arab World. A Matter of EU-Mediterranean Policy? 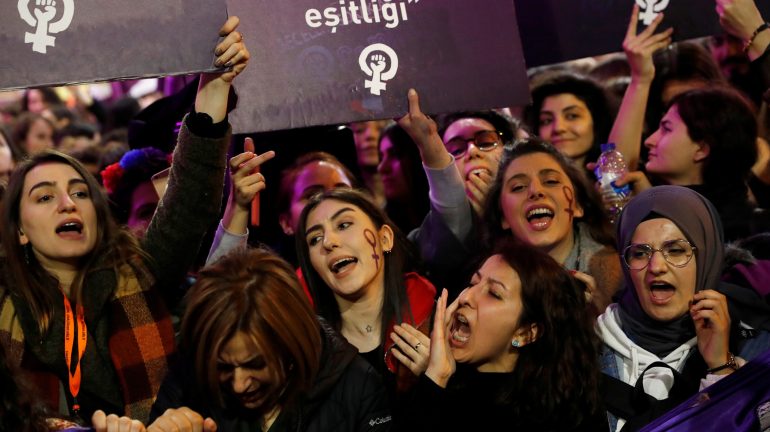 Although women made an important contribution to the Arab Spring in the year 2011, they are no longer playing a comparable role in the reorganisation of political life in the Arab transition countries. Not all female activists from the Arab Spring are aware of the fact that phases of revolutionary upheaval are usually followed by an increased demand for security and order. This is the reason why post-revolutionary transition processes leave little room for a fundamental realignment of gender relations, which nevertheless affect the core of every (re)structuring process. Nawal El Saadawi, a well-known Egyptian women’s rights activist warns that women often lose their rights after the success of a revolution, since the patriarchal class laws and values are embedded in the society. Not until women and men, regardless of their differences, can participate with equal entitlement on all levels, namely in politics, economics, culture, science, and all other socially-relevant areas, will the postulate of gender democracy be fulfilled. Reference to this objective occurs in the United Nations Arab Human Development Report, which as long ago as 2002 came to the conclusion that the systematic unfair treatment of women in political, economic, social and legal terms was a key obstacle to development in Arab societies. However, as demonstrated in the Gender Index prepared on behalf of the OECD, most of the Arab states lie at the far bottom end of the scale so that it is reasonable to speak of an Arab exemption.

The EU has longstanding and dense relations with its southern neighbour countries, institutionalised in diverse political and legal frameworks, such as the Euro-Mediterranean Partnership (EMP), the European Neighbourhood Policy (ENP) and the Union for the Mediterranean (UfM). Embedded in these frameworks is the promotion of human rights and democracy, explicitly including gender-democracy. However, these normative goals always ranked low on a policy agenda prioritising high politics such as security and economy. More than that, gender issues have often been exploited as a strategy to achieve higher ranking policy goals. The Arab Spring revealed the hypocrisy of longstanding EU cooperation with authoritarian regimes in the MENA region, which was based on a shared interest in keeping political Islam down. One of the most important lessons the EU has to learn from the Arab Spring is to fully accept democratically legitimised governments in its neighbourhood, even if they include Islamists.[1] This contribution examines how the new tolerance to be adopted towards political Islam after the Arab Spring can be brought into harmony with the fostering of women’s rights in the MENA region.

Before the Arab Spring, the EU was supporting the agenda of secular women’s rights groups, paradoxically in tacit agreement with the authoritarian regimes of the region that pursued a kind of secular state feminism as an instrument in the fight against political Islam. Since the Arab Spring, this promotional practice of the EU appears anachronistic. However, adapting the external promotion of gender democracy to the new political realities confronts the EU with a dilemma: how to cope with Islamists if women’s rights are at stake.

It is a European misperception to believe that the resilience of patriarchal gender relations in the Arab world can be explained with reference to Islam alone. The patriarchal social order we find all over the world, including « the West », and the reasons for patriarchal resilience are much more complex. Nevertheless, the question still remains as to why political Islam is currently propagating an especially restrictive interpretation of gender relations and why this restrictiveness is apparently met with social approval. One approach at explaining the broad acceptance of patriarchal gender relations, among both men and women, is the feeling of distress. According to this argument, consciousness of one’s own cultural roots can be seen as a defence reaction against domination by foreign influences and loss of identity. Just as colonialism was once perceived as an attack on one’s own identity, today it is the processes of globalisation and Western dominance. Modernisation, on the one hand, and the impoverishment of large parts of the populations, on the other, are weakening traditional power relations in which large families and family networks are important and are therefore also questioning the gender political social contract anchored within them. With its emphasis on the traditional role of woman in a social order oriented towards community, political Islam offers a religiously legitimised alternative approach to the « Western » modern age with which processes of domination by foreign influences are fended off and the individual’s own identity, which has run into difficulties, can be stabilised (Renate Kreile, 2009). Through their connection within the family, namely as mothers and hence socialisers of the next generation, women are accorded a special role for retaining the values and norms of Islamic society. They become bearers of the culture and as the epitome of virtue and morality symbolically embody the foundation of an intact and integral Muslim society. In the Arab world patriarchal order is now more than ever playing a decisive role in the construction of an identity perceived as authentic. Even if political Islam has primarily taken control of the topic, it must not be overlooked that all members of Arab society are to a greater or lesser extent characterised by patriarchal traditions and practices, regardless of whether they are, like the majority of society, Muslims or belong to a minority of Christians or atheists. Gender is one factor in these inequities, but class, family, and power are even more decisive division lines within society (Sholkany, 2012). In Egypt, social inequality and a strong awareness of individual social status have led to the establishment of almost separate lifestyles according to class affiliation. The growing prosperity gap in Arab societies is not irrelevant in terms of gender politics because it leads to difficulties in creating a large and powerful women’s rights movement that encompasses all segments of all societies. Women’s politics has hitherto been primarily the topic of a minority of educated women from the upper middle class with a secular agenda, who according to Johanna Block have no contact whatsoever with their clients during their daily lives. They are barely regarded as role models but tend instead to be perceived as foreign and distant and hence are also not able to take on the function of multipliers with which they are credited by the EU and other western financiers. To sum up, the assumption that only political Islam threatens gender democracy is a myth.

In order to overcome traditional, almost « orientalist », misperceptions of the Arab world, the EU should henceforth open up to the very heterogeneous spectrum of diverse political and social groupings to better understand Arab societies. With regard to gender issues, the EU should not only listen to like-minded laic women’s rights groups, but pursue the much broader regional gender discourses intensively, incorporating Islamist positions. Within the Islamist parties, it is above all young women who are questioning traditional stances of society and are therefore important agents of change to be focused on.

Given the fact that the EU has lost a lot of credibility in Arab civil society and that EU interference is met with growing scepticism, the EU’s promotion of gender democracy should not be framed as a project of Europeanisation but should be positioned within the overriding international context in which the transnational women’s rights movement plays a key role. As a reference framework for European demands within the more-for-more approach,[2] CEDAW or the Arab Human Development Reports are more suitable than the gender political primary and secondary law of the EU. Within this context, regional and local approaches to unify the women’s rights movement could be promoted. Instead of deepening the rift between secular and religious women’s rights activists, the EU could build upon their commonalities, such as the demand for political participation, material improvement in women’s status and the fight against domestic violence. To pave the ground for an open dialogue, language matters. Politically sensitive terms such as « secularism » or « feminism » can be avoided in favour of notions that are also compatible with the semantic field of Islamist concepts, such as « fairness » and « justice ». To start an open dialogue with all segments of civil society, the new EU delegations could play a positive role. In order to carry out this role, however, it is necessary to have appropriate personnel and specifically to employ young women who speak Arabic, have an academic background in Islamic studies or similar and are therefore less prone to a reproduction of anachronistic misperceptions. There are many ways for the EU to overcome persistent patterns in its external promotion of gender democracy. It is too early now to evaluate the EU’s new policy approaches that were developed after the Arab Spring with regard to gender equality, such as SPRING FORWARD (2012-2016) or the follow-up of the Ministerial Conference (UfM) on Strengthening the Role of Women in Society, Paris Dept. 2013. To see whether or not lessons had been learned, the implementation of all these initiatives will have to be closely monitored. However, to regain the tremendous loss of credibility, restraint and respect for the variety of different opinions are required.

[1] The terms “Islamism” and “political Islam” are used synonymously in this study and denote the very heterogeneous spectrum of political convictions that are guided by religious beliefs. It’s a broad concept, covering fundamentalist as well as moderate currents, be they peaceful or not.

[2] More for more is a new approach of positive conditionality within the renewed European Neighbourhood Policy. (European Commission, 2011)

Commission of the European Communities. Communication from the Commission to the European Parliament and the Council. Gender Equality and Women’s Empowerment in Development Cooperation. 2007. Available at: http://eurlex.europa.eu/LexUriServ/site/en/com/2007/com2007_0100en01.pdf  [accessed: 23 June 2012].

Kalin, I. Roots of Misperception. Euro-American Perceptions of Islam Before and After September 11. In: Jumbard, J. (ed.): Islam. Fundamentalism and the Betreyal of Tradition. Bloomington, Indiana: World Wisdom Inc., 149-193, 2009.

Mashhour, A. “Islamic Law and Gender Equality – Could There be a Common Ground? A Study of Divorce and Polygamy in Sharia Law and Contemporary Legislation in Tunisia and Egypt”. In: Human rights Quaterly, Vol. 17 (2), 265-296, 2005.