The Long Retreat from Euro-Mediterranean Integration 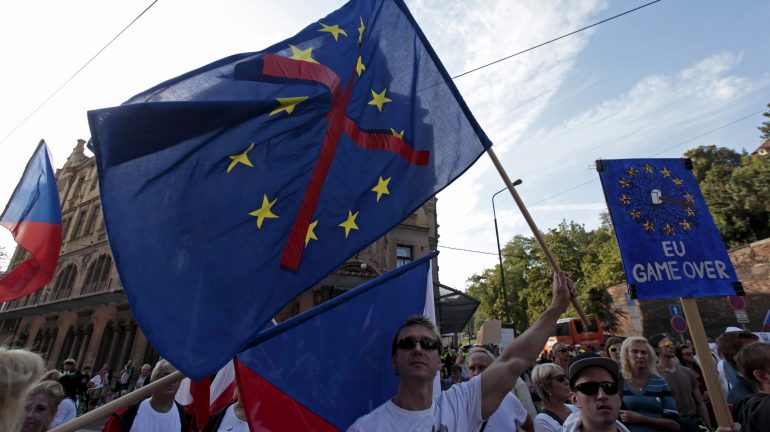 Twenty-five years ago, European Union (EU) and Southern Mediterranean governments committed themselves to a programme of pan-regional integration. Since then they have gradually turned their backs on this ambitious aim. While cooperation and economic exchanges across the Mediterranean have increased in some measure, the overarching trend has been towards a more limited set of policy objectives. Governments both north and south of the Mediterranean have preferred policies of ad hoc engagement and a logic of strategic containment over a commitment to deep economic, political and social integration between the two regions.

At its birth in 1995, the Euro-Mediterranean Partnership (E M P) was one of the EU’s most comprehensive and forward-looking foreign policy initiatives. But few of the EMP’s ambitions have been fulfilled. Relations between Europe and Arab states, Turkey and Israel have become tenser and less warm. Rather than being a vehicle for regional integration and stabilisation, the EMP – rechristened the Union for the Mediterranean (UfM) in 2008 – has failed to head off disintegration and new geopolitical rivalries among Arab states. New wars erupted in Syria and Libya, while existing problems like the Arab-Israeli conflict have worsened. Far from working as a bridge between cultures, the Mediterranean Sea came to claim tragically large numbers of migrant lives. And the EU has gradually lost influence rather than gaining leverage, as other powers like Russia have re-entered the region as geopolitical actors.

The EMP represented an ambitious new multilateral approach to Euro-Mediterranean relations. Its launch indicated that the EU would not neglect the Southern Mediterranean as the Union immersed itself in preparing Central and Eastern European candidate states for accession. It was designed around the concepts of cooperative security, joint decision-making and region building, and was significant for including Israel alongside Arab states. Its centrepiece was the commitment to work towards a Euro-Mediterranean free trade area and deep economic integration between the two regions.

The EU chose to focus on deepening a “Mediterranean” rather than “broader Middle East” policy so as to progress further with this notion of deep integration – both between Arab states themselves and between them and the EU. Many saw the EMP as the epitome of the EU’s distinctive, multilateral and liberal approach to foreign policy. Crucially, it linked the aim of economic cooperation to efforts to support integration across the Mediterranean in a whole host of other areas: the EMP kick-started dialogue and Euro-Mediterranean initiatives in just about every major policy sector, bringing together businesses, trades unions, energy experts, youth groups, artists, parliamentarians, NGOs, municipalities and many others.

In practice, however, a number of factors limited cooperation and integration across the Mediterranean. The EMP committed to creating a Euro-Mediterranean free trade area but progress on trade liberalisation was limited. Both EU and Arab states resisted opening their most sensitive economic sectors. The EU signed association agreements providing for free trade in goods with all Southern Mediterranean states except Libya, and yet these did not usher in any significant or qualitative change in the still limited economic interdependence across the Mediterranean. They offered asymmetric liberalisation, with the EU opening up to a greater extent through the offer of duty free access for goods from Southern Mediterranean partners. However, in practice few of these countries were able to take full advantage of new export opportunities. Non-tariff barriers remained intact and the service and agricultural sectors were included to only a very limited degree. Integration did not advance between Arab states, while EU trade and investment flows into the Southern Mediterranean remained modest.

In the political sphere, Arab regimes signed up to cooperation on human rights and democracy but then resisted any reform on these issues. Security cooperation was held back as the 1994 Oslo Accords between Israel and the Palestinian Authority broke down; indeed, it was the resurfacing of tensions over this question that became the main obstacle to cooperation and integration in all the different policy sectors of the EMP.

After the terrorist attacks of 11 September 2001 in New York and Washington DC, and those later in Madrid and London, counter-terrorism and security came to dominate Euro- Mediterranean relations. The EU began a strand of de-radicalisation initiatives under the EMP rubric, while member states stepped up their bilateral, direct security cooperation with Arab regimes. The EMP morphed into a more functional framework for such issues and drifted away from being concerned with building a common, integrated Euro-Mediterranean region.

In some ways, this brought European states closer to Arab governments, the latter having long advocated a tighter bearing down on terrorism and radical Islamist groups. This came at a cost, however, in terms of a diminished concern with human rights and underlying economic integration between the two regions. Rhetorically, EU leaders insisted the 9/11 attacks showed it was more important than ever to encourage Arab states to introduce political reforms and to open up their economies to speed development and undercut the causes of radicalisation. In practice, the EU made little effort to follow through on such rhetoric. At the behest of regimes, the EU declined to build up any significant engagement with Islamist groups and parties. The EU’s priority was now immediate threat containment rather than building a long-term security community.

At this stage, the European Neighbourhood Policy (ENP) was introduced, as a means of offering more tailored individual action plans in each partner state. Although the action plans were supposed to be built around Arab states’ own priorities and better enable them to feel more ownership of the EMP, they complained that the plans had the effect of narrowing the agenda down to a focus on the EU’s main priorities. While formally still committed to regional integration and community building, in practice the EU moved to place greater stress on its bilateral relations with each Southern Mediterranean state. The rich array of linkages that had been built up at the Euro- Mediterranean regional level continued to exist – and even thicken – but delivered little in terms of tangible cooperation or integration.

Moreover, after a burst of policy activity after 9/11, by the late 2000s the EU’s focus on the Mediterranean was fading somewhat. The region was slipping down the EU’s list of foreign policy priories. To some extent this reflected the fact that the threat of radicalism and international terrorism emanating from the region had not become as regular or overwhelming as many had feared would be the case. It was also the result of the EU beginning to pay more attention to the big rising powers around the world, with which economic cooperation seemed far more promising. In 2008, the French government proposed the creation of the new UfM. After a number of diplomatic confrontations and a process of re-modelling, the UfM was effectively folded into the exiting EMP. The UfM was designed to focus on relatively apolitical areas of cooperation. It marked another step away from any priority being attached to Euro-Mediterranean integration and another step towards policies based around pragmatic, low-political projects.

From the Arab Spring to Migration Concerns

When the Arab Spring erupted in 2011, the EU upgraded its policy instruments but did not qualitatively change its approach to the region in the wake of the revolts. Crucially, as different Southern Mediterranean states took divergent political paths, the EU focused on bilateral policies towards each partner. Ambitious pan-regional initiatives became even more difficult to implement.

The main economic innovation after the Arab Spring was the EU’s offer to negotiate deep and comprehensive free trade areas (DCFTAs) – as a reinforced vehicle for economic integration. However, these have not progressed in the Southern Mediterranean like in the eastern neighbourhood. The EU offered a DCFTA only to four states. Egypt and Jordan have not yet embarked on negotiations. The talks with Morocco have been interrupted after a European Court of Justice ruling over their applicability to Western Sahara – with Morocco suspending contacts after this judgement. Talks have advanced with Tunisia but the latter has resisted EU pressure to open up in some areas and the negotiations appear some way from being concluded. Meanwhile, three Eastern European states have in the same period concluded and implemented most of their DCFTAs.

The EU increased some quotas for agricultural goods but without any dramatic openings and carefully negotiated on a sector-by-sector basis with individual countries. Yet trade provisions differed increasingly between different Arab states. This has accentuated even further the socalled hub-and-spokes structure to relations, with Arab states developing trade relations on a bilateral basis with the EU to a far greater extent than with their immediate neighbours in the region – the very opposite of the EU’s declared aim to build peace and stability in the Southern Mediterranean through economic integration. The initial plan to link together bilateral trade provisions has never come to fruition.

Most regimes in the Southern Mediterranean have become less willing to sign up to the EU’s Euro-Mediterranean Network of Economic Studies, “Trade and Investment in the Mediterranean: Country and Regional Perspectives”, EMNES Studies 4 2, 2017, p.16. rules and norms. Rather than a focus on common Euro-Mediterranean integration, a more geopolitical dynamic has gradually become predominant. More nationally specific dynamics became even more influential as the momentum of the Arab Spring faltered. This fading momentum has taken the EU-Mediterranean into a new phase in the last three years.

In this next phase, the EU’s concerns have switched to migration and conflict. On the issue of migration, cooperation has deepened between the EU and Arab regimes – and, indeed, some talk of a common containment-based Euro-Mediterranean security space now taking shape. However, this was not the original spirit of the EMP and, moreover, the migration agenda is set by the EU and not Arab states’ priority. The recently held first ever summit between EU and Arab League leaders re-ignited talk of pan-regional cooperation but in practice the summit was dominated by EU pressure on Arab states to control outward migration. This issue is about limiting connections between the two regions not deepening integration between them.

In sum, multiple explanatory factors have pushed EU-Mediterranean relations away from deepseated integration to a logic of uneasy co-existence and containment. Part of the explanation lies within the EU itself as the bloc has become more defensive, brittle and weak. Another part of the challenge derives from the more fragmented structures of the Middle East and North Africa. And other explanations are rooted in global shifts and the emergence of different types of security dilemmas. Given the combination of all these reasons, the original vision of crossregional integration and cooperation looks out of place in the era dominated by conflict, violence, instability, humanitarian tragedy and the pushback against democratic reform in today’s Middle East. The EU’s policy is increasingly of keeping the region at a distance instead of working to deepen inclusive integration and cooperation. It is hard to see this reverting to a more inclusive policy dynamic any time soon. 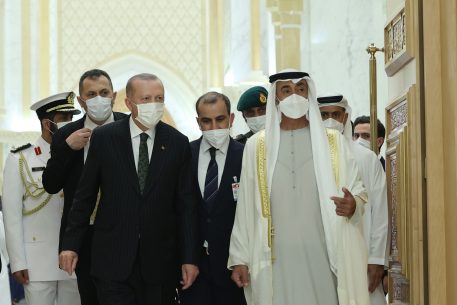 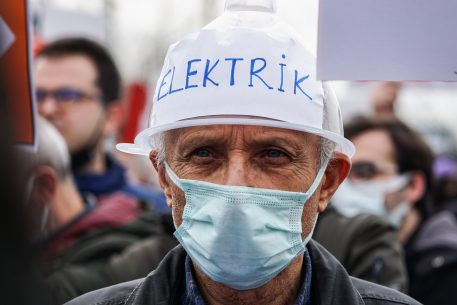 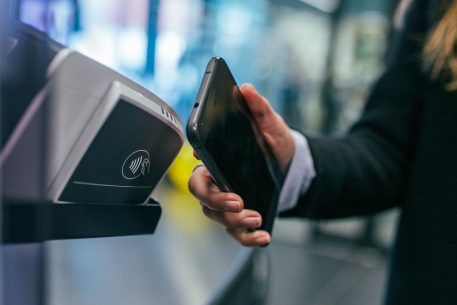