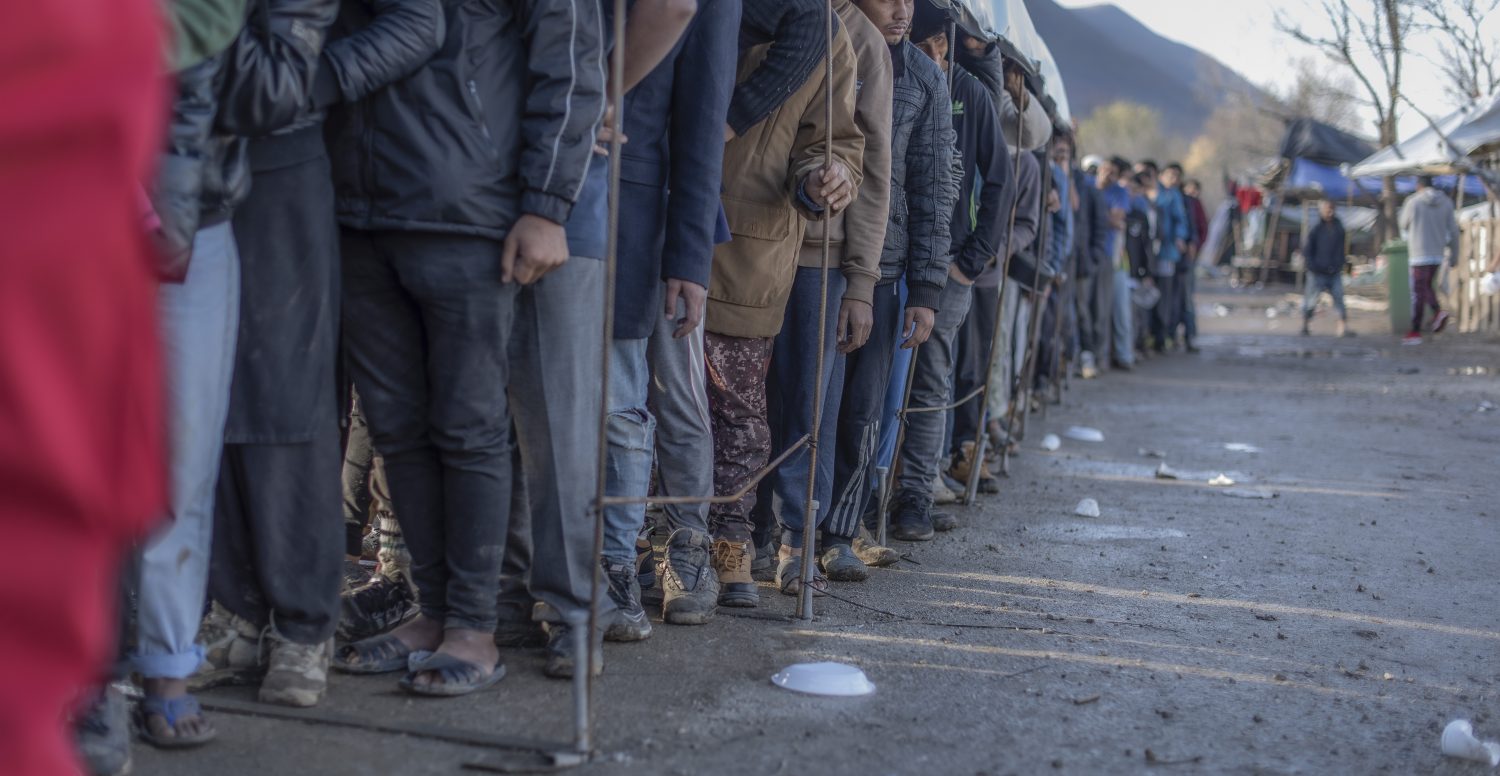 Migration as a “Threat”

The instrumentalization of migration at the European Union’s external borders is starting to become commonplace. In February 2020, the Turkish government sent more than 13,000 people to the border with Greece. In May 2021, Morocco allowed more than 10,000 people to cross irregularly into Ceuta over the course of two days. In autumn of 2021, it was the turn of the Belarusian regime, which helped thousands of people reach the Polish, Latvian and Lithuanian borders. In this context, Brussels has not hesitated to describe the arrival of thousands of people (including families and minors) as a serious “threat” to its “security.” Nor has NATO, which, in its new Strategic Concept, considers the “instrumentalization of migration” by “authoritarian actors” a form of “hybrid threat.”

The use of migration for political ends is not new. The American political scientist Kelly M. Greenhill (2010) coined the term “weaponization of migration” to refer to the use of migration as a weapon of political and military warfare. Taking a long-term historical perspective, Greenhill distinguishes between coercive intentions, i.e. when migration is used as a foreign policy tool to apply pressure to other states; dispossessive intentions, i.e. when the aim is to annex certain territories or consolidate power; and economic motivations, in which the goal is financial gain.

The intentions of Turkey, Morocco and Belarus in the aforementioned episodes were clearly coercive, as they were instrumentalizing migration to induce changes and obtain concessions from the EU. Turkish President Recep Tayyip Erdoğan was seeking increased financial aid for refugee reception and support for Turkish military operations in northern Syria. Morocco was responding to what it considered an act of disloyalty, namely, the hospitalization in Logroño of Polisario Front leader Brahim Ghali, and, ultimately, was demanding collusion on the issue of Moroccan sovereignty over Western Sahara. Belarus, with Russian backing, was pressuring the EU not to interfere in its internal affairs.

The EU has been shocked by each of these instances of “blackmail.” On the one hand, it has blanched at the “indecent” and “cynical” use of refugees for political ends by third countries. On the other, it has wasted no time in referring to the arrival of thousands of people (again, including families and minors) as a serious “security threat” and, thus, declaring itself “at war,” in terms of both its rhetoric and the deployment of national armies to the border. The EU has responded forcefully, and even with unusual unity, without realizing that, ultimately, it is dealing with the consequences of its own actions… in multiple ways.

First, the EU is a victim of its overreaction; its almost obsessive fear of another “migration crisis” is what ensures the blackmail’s success. In the end, it does not matter how many people there are. What matters is the fear: fear of migrants by part of the electorate, and fear by governments of the division and chaos the EU and its Member States display each time. There are experts who claim that the Russian invasion of Ukraine was also intended to destabilize the EU with a fresh “wave” of refugees. Only this time, there was no overreaction, even as the number of people fleeing the war quickly swelled from thousands to millions. The refugees’ proximity and, especially, the fact that the EU has experienced this war as its own (with the perception of a common enemy) explain why, this time, the tactic failed.

Second, the instrumentalization of migration is simply the other side of the EU’s policy of outsourcing migration control and international protection to its neighbours. By forcing neighbouring states to control our borders and host those refugees we are no longer willing to take in, the EU and its Member States have automatically placed themselves in their hands. They were offered incentives in exchange for control and containment, from development aid funds to potential trade or visa agreements. Europe drove the geopoliticization of migration, subordinating international relations to certain migration-control objectives. Now, the third countries are looking to impose their terms, this time conditioning migration policy to their foreign policy goals. In this sense, and though few are willing to admit it, it was the EU and its Member States that initiated the instrumentalization of migration. And the way they did it is hardly trivial.

In recent years, the EU has resorted to increasingly informal formulas. Bilateral agreements have given way to other more flexible, ad hoc forms of agreement, which are inserted into broader cooperation frameworks. Unsurprisingly, these negotiations have been conducted mainly by the Member States, rather than at the EU level, which invariably requires much more standardized formulas. This has resulted in greater flexibility and bargaining power, but also less transparency. This should not prejudice the necessary control by the legislative and judicial powers of each country and at the European level. The misnomered EU-Turkey deal of 2016, which sought to contain the irregular arrivals to Greece, is the best example of the risks of this informality: the Court of Justice in Luxembourg declared that it lacked jurisdiction to rule on it, as it was an informal agreement between Turkey and the Member States.

Third and finally, the EU is its own worst enemy when, for all of these reasons, it is willing to renounce its own foundations. Declaring itself at war with the instrumentalization of migration by neighbouring countries opens the doors to exceptions. In late 2021, Poland declared a state of emergency, with everything that entails in terms of the suspension of fundamental rights, unlimited use of force by the army, and the militarization of large areas to which the press and NGOs are denied access. This is not new. The same thing happened in Greece with pushbacks, which, although blatant violations of the law, have been a constant in recent years. Every time, the political use of migration by third countries has been the justification for limiting fundamental rights recognized under domestic, European and international law.

This drift is not exclusive to certain border countries. In December 2021, the European Commission published a proposal for a regulation to equip the Member States with a legal framework to respond to such situations. The document defines the instrumentalization of migrants as “a situation where a third country instigates irregular migratory flows into the Union (…),where such actions are indicative of an intention of a third country to destabilise the Union or a Member State, where the nature of such actions is liable to put at risk essential State functions, including its territorial integrity, the maintenance of law and order or the safeguard of its national security.” The proposed measures include limiting the number of border crossing points, extending deadlines, increasing migration control measures and facilitating expedited return at the EU’s external and internal borders. As noted by numerous international organizations(ECRE, Amnesty International, etc.), these measures could normalize the state of exception and thus undermine the fundamental rights of migrants, refugees and asylum seekers.

In his book After Europe (2017), Ivan Krastev notes that migratory crises could well be the harbingers of the beginning of the end of European liberalism, not because of what they are but because of what they produce. Since 2015, our fear of another migration crisis has made us willing to accept the unacceptable. And that is the real problem. Internally, we could end up accepting the normalization of states of exception and, thus, the violation of fundamental rights. In this regard, the instrumentalization of migration by third countries has merely provided the perfect narrative. Even if migrants are perceived as victims, their role as “weapons” of pressure in the hands of the governments of neighbouring countries also makes them the main “enemy.” It does not matter how many there are, nor, ultimately, whether their arrival is used as a form of pressure by neighbouring countries. Even when it is not, the talk of a “threat” continues. The lives lost at the Melilla border fence in June 2022 attest to this. Under the “threat” narrative, no one doubts that the response should be as forceful as possible.

Externally, the instrumentalization of migration – first from Europe and now from abroad – has made us hostages (and, thus, stripped us of our voice) in the face of pressure from third countries. Therein lies the main surprise and fear. This, perhaps, is what is truly new. The asymmetry of power – or conditionality in Cassarino’s (2007) words – has been inverted: today, it is the neighbouring countries that impose their terms. Because the number of irregular arrivals depends on them. Most recently, this subordination was on display in the Spanish government’s recognition of Moroccan sovereignty over Western Sahara. One wonders to what extent this was the ultimate goal of Moroccan cooperation. The problem is only compounded by the fact that, in complex regional contexts, responding to the demands of some can mean raising the suspicions of others. Hence, Algeria’s response to the change in the Spanish government’s position was not long in coming. Not only is it difficult to decide which comes first – Morocco or Algeria, migration or petrol prices – but also migration is fluid: those who do not arrive in one place will eventually arrive in another.

This does not mean that there is no alternative. There is, but for that to happen, the underlying conditions have to change. That means no longer overreacting every time. The Ukrainian refugee crisis is instructive in this regard. The alternative also means reversing the process of outsourcing migration control, in order to de-geopoliticize migration so that it ceases to be a bargaining chip in international relations. We need a foreign policy that is not purely transactional, that does not impose the interests of some over others, and that works to achieve common medium- and long-term goals. We also need migration policies that address the causes and regulate the flows, beyond mere containment measures. Otherwise, these policies will always be doomed to fail, because containment only reduces arrivals at a given time and place. As long as the push and pull factors driving migratory flows remain, a passage will always be found. In the end, the alternative cannot be stripping away the rights of those who, despite it all, do eventually arrive. This is true for two main reasons: because compliance with the rule of law is the sine qua non for any democracy, and because today’s exclusion is tomorrow’s conflict. Contrary to what the far right would have us believe, “our” security depends on “their” rights.