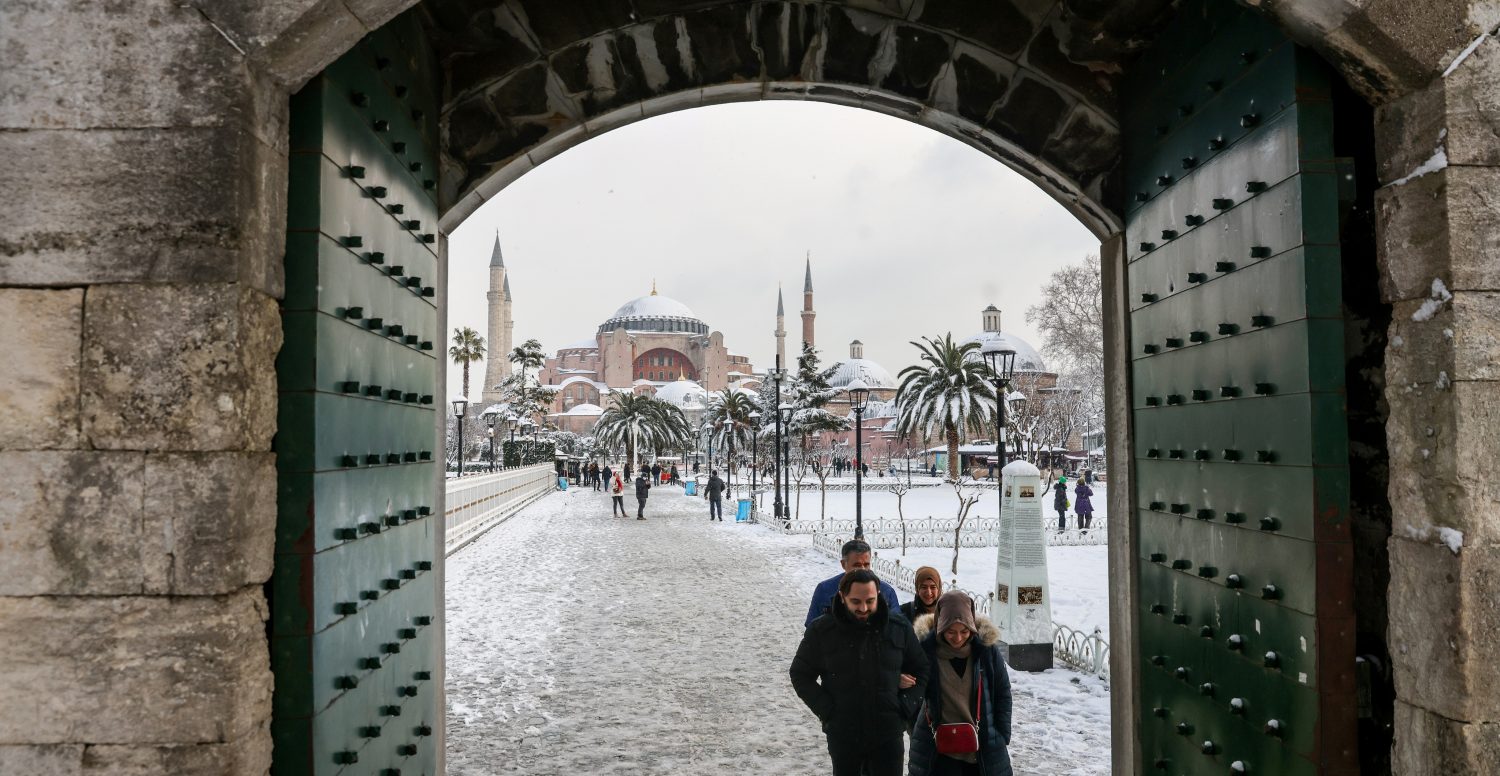 Implications of the Conversion of Hagia Sophia into a Mosque, Inside and Outside Turkey

This July marks two years since Turkish President Recep Tayyip Erdogan issued a decree to transform the Hagia Sophia museum back into a mosque, leaving another mark on this edifice’s long history.

Established in 537 during the reign of the Byzantine Roman Emperor Justinian I, the Hagia Sophia’s first identity was as a cathedral, then the largest in the world, designed to symbolize the power of the Eastern Roman Empire. During the Fourth Crusade, the Hagia Sophia encountered the first of many transitions when it was turned into a Roman Catholic place of worship (1204-1261), only to be returned to its original status decades later as the Episcopal See of the Ecumenical Patriarch of Constantinople. However, it would forever lose its official status as a church following the Ottoman conquest of Constantinople in 1453. During the Ottoman years, the Hagia Sophia stood as one of the main mosques serving the city.

The building maintained its status as a mosque after the Turkish Republic was founded in 1923. However, in 1934, the nation’s revolutionary leader, Mustafa Kemal Ataturk, issued a decree to transform it into a museum. This was seen as a way of defusing tension with Greece and the Orthodox Christian world. The decree also made the Hagia Sophia a relic to marvel at, an object belonging to the past and thus separate from the politics of the present. Ataturk’s decision would also eventually grant Turkey important international recognition. In 1985, UNESCO declared the Hagia Sophia a World Heritage Site. It seemed to Turkey and to the world that the building’s status as a museum was set in stone.

For the Islamists in Turkey, however, this was not at all a done deal. Even as Istanbul’s mayor in the 1990s, Erdogan longed to see the day when Muslims could once again pray under the Hagia Sophia’s holy dome. The charismatic Erdogan understood too well that turning it back into a mosque could only fit into a long-term plan, such as realizing his goal of making Turkey a more Islamic place. However, the path ahead was much harder than Erdogan, or his AKP party, could have ever imagined.

While Erdogan transformed Turkey into an economic powerhouse and strengthened regional relations during his first decade in power, the 2013 Gezi Park protests showed the level of discontent among the country’s youth. Erdogan’s hope of making this new generation more pious failed. Another blow came when Erdogan lost political hold of the government during the first round of the 2015 elections. He was left without a majority and was forced to abandon support for liberal policies in order to form a coalition with the ultra-nationalist MHP. Erdogan’s troubles continued with the failed coup of 2016, which proved he needed to shore up more power in the 2018 presidential elections. All these changes would have implications for regional relations, causing neighbours to begin seeing Turkey more as a rival than a friend.

When Erdogan announced his plans in the summer of 2020 to change the Hagia Sophia back into a mosque, Turkey had hit rock bottom in its international position. He was no longer the popular leader that Europe and the US courted (save for some brief moments during Trump’s term). While he remained popular among estranged Islamists, he had long burnt all bridges with Arab governments in Egypt, Saudi Arabia and the United Arab Emirates. Israel too had changed course, understanding that Turkey would need to court it, not vice-versa as had been the case in the past. By 2020, Israel had left Turkey behind, joining Greece, Cyprus and Egypt –– among others later –– in forming a regional gas forum. If this was not enough, Turkey also remained at odds with Greece and the EU with respect to the ongoing refugee crisis. It remained steadfast in maintaining military relations with Russia, culminating in Turkey’s purchase of the Russian S-400 missile defence system. In short, Turkey had never been so isolated within the region.

Erdogan did manage to show some deft manoeuvring. During the Syrian Civil War, he was able to consolidate control over the country’s northern regions following an agreement with Russia. Turkey also came out on top in the Libyan conflict. As much as the US and EU might have wanted to toss him aside, Erdogan showed that he could still make and break the rules. This is where the Hagia Sophia comes into the picture.

Erdogan was wise enough to understand domestic political dynamics. He understood that any protests against the Hagia Sophia decision from Europe –– especially Greece –– would be seen as interference in Turkish politics by the nationalist CHP, his main opposition party, and by Turkey’s electorate. In other words, European pushback would immediately snap opposition forces into “defence mode.” Even if the CHP opposed transforming the Hagia Sophia back into a mosque, perhaps seeing such a change as stomping on Ataturk’s legacy, this would be overshadowed by concern that foreign powers were dictating to Turkey what it can and cannot do.

With Turkey already playing the “rebel” on the international scene, Erdogan correctly assessed that his play for the Hagia Sophia would not create a crisis at home. Protests from Greece, the US and Europe went almost unnoticed and the opposition remained quiet. Once converted into a mosque, Erdogan could claim that he succeeded in punching another “notch in his belt,” which would fortify his political base –– both the Islamists and nationalists from his MHP coalition partner.

Despite wall-to-wall international condemnation, this was a lost battle from the start. Truth be told, Europe knew that Erdogan controlled the levees managing the flow of Syrian refugees. Should they protest too strongly, Erdogan could allow hundreds of thousands of Syrians into the EU.

The Hagia Sophia’s conversion can also be seen as marking Turkey’s reemergence in regional politics. Now seeking to reconcile more than to bully, Turkish policy has turned in the last two years toward mending ties with Israel, the United Arab Emirates, Saudi Arabia and Egypt. Even before the Russia-Ukraine crisis, Turkey desperately needed to diversify its energy sources. It also recognizes that Israel’s growing ties with Greece will pose new challenges for its long-term strategy to act as the main regional representative of the Palestinians. This also brings us to the point that for all of Turkey’s attempts to make better, it still seems set to challenge Greece on numerous fronts.[1] The conversion of Hagia Sophia also provided Erdogan with important soft power among Islamists. Who could deny Erdogan as the leader of the Islamic world after he could be heard chanting Quranic verses at the opening of the Hagia Sophia Mosque? Or last spring, when he opened its doors to thousands of Muslims from all over the world to say their Holy Ramadan prayers, tevarih, following the lifting of Covid restrictions? Erdogan certainly sees himself now enshrined in Islamic memory as the leader who defied Europe and reestablished the historic right of the ummah to pray there.

Unfortunately, this has come at a cost. With thousands of worshippers and tourists visiting the site daily, and without the proper supervision formerly ensured by the Ministry of Culture, the building is suffering not only from wear and tear but also from malicious acts. Just this month, it was reported that the 1400-year-old imperial gates were vandalized. In response, specialists in both Turkey and Greece voiced concerns that the Department of Religious Affairs’ mismanagement of the site may lead to permanent structural damage.[1] Shortly after this report, other worrying incidents of vandalism of its walls were reported.[2]

UNESCO has continued to voice its concerns for the holy site; just recently, the Greek Prime Minister Kyriakos Mitsotakis also voiced his concerns to UNESCO.[3] However, it seems clear that international pressure of this type will have little or no effect on Turkey’s approach. The only way to effect any real change will be through the status quo, wherein international organizations continue working with Turkey toward some mutual understanding with respect to heritage sites. This, however, is where the good news can be found.

Over the last two decades, Turkey has embarked on the restoration of numerous churches and synagogues in Istanbul and throughout Anatolia and Thrace.[4]While local municipalities have sponsored some projects, they have been mostly sponsored by the State, often in collaboration with international organizations like UNESCO or co-sponsored by the European Union, the United States and neighbouring countries like Bulgaria. In some cases, individual actors in academia and the arts have taken it upon themselves to preserve the memory of the past and initiated the restorations.

Based on this record, one analyst seemed to correctly assess that the bleak state of affairs at the Hagia Sophia is related not to neglect of its historical and religious significance, but to the building falling under the purview of the Department of Religious Affairs.[5]Thus Turkey should do its utmost to calm fears and implement measures to control unchecked crowds.

It should be noted too that even if the Turkish opposition wins in the 2023 elections, the Hagia Sophia will likely remain a mosque. In any case, one can only hope that the building will be protected and that it will continue to capture the minds of believers from all faiths and tourists, as it has for centuries. Unfortunately, however, with Turkey and Greece still greatly at odds with each other, it is likely that the Hagia Sophia will continue to be a source of conflict.