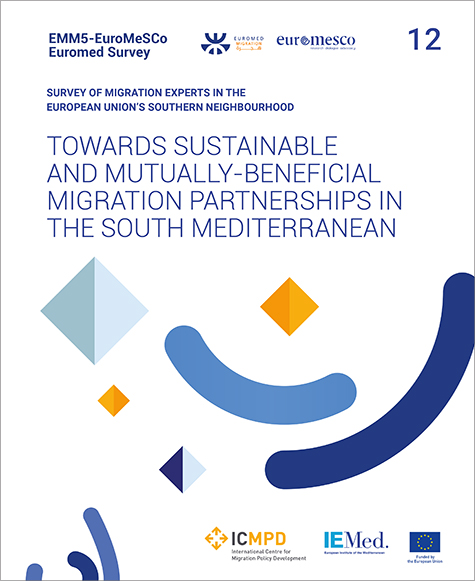 Employment and Social Cohesion in the Context of Forces Displacement: The Cases of Jordan and Lebanon

The Mashreq region has experienced an unforeseen level of forced displacement  since the onset of the Syria crisis in 2011. Economic downturn, political instability  and rising social tensions in Iraq, Gaza and Yemen have only added to the number  of women, men and children fleeing conflict. According to the Internal Displacement  Monitoring Centre (IDMC), 7.8 million refugees and asylum seekers fled the Middle  East and North Africa (MENA) region between 2010-2020, alongside an estimated  2.9 million persons who have become internally displaced each year (IDMC, 2021).  Jordan and Lebanon host some of the largest numbers of refugees in the region,  having jointly received an estimated 2.8 million refugees from Syria (UNHCR, 2021,  Government of Jordan 2020). While the two countries were not in a socio-economic  position to receive such large numbers of refugees, their geographical locations,  cultural similarities, and openness made them destinations for many.

Lebanon, in particular, has experienced multiple crises in recent years, including the  collapse of the financial sector, an economic crisis, political instability, the harsh  consequences of COVID-19, and the blast that hit the country’s capital in 2020. While  Jordan has maintained its socio-economic and political stability, it has nonetheless  experienced rising levels of unemployment, increasing pressure on public services  and the inevitable economic consequences of the COVID-19 pandemic. Both countries  are also facing reductions in international humanitarian assistance for displaced  populations, as part of the general trend towards investment in development.

With mounting domestic concerns, Jordan and Lebanon have both instituted  regulatory frameworks that aim to control access to the formal labour market for  non-nationals, including refugees. While the levels of restrictions vary, both stem  from the stark reality of strained economies and high levels of unemployment.  Economic circumstances have powerful influence over the willingness and ability of  host communities to accommodate the displaced. The survey carried out by EMM5-  EuroMeSCo highlights the most commonly perceived challenges of host communities.  Unsurprisingly, these include the inability of host countries to cover the basic needs of  displaced populations, while also providing for their own citizens. Survey respondents  also perceive the international community as having a responsibility to respond not  only to the needs of displaced populations, but also to the pre-existing weaknesses of  the countries that host them.

This article analyses the perceptions of host communities expressed in the EMM5-  EuroMeSCo survey, against the labour market realities of Jordan and Lebanon.  It further considers the use of international trade and investment opportunities to  address underlying development challenges in main host countries, while also  acknowledging their limitations. Finally, it draws some conclusions and presents  a set of recommendations to address the short- and long-term impact of forced  displacement crisis in Lebanon and Jordan.

When compared to surrounding countries, both Jordan and Lebanon are resource  poor. Their economies lack diversification and are primarily driven by the services  sector as opposed to high value-added production and, as such, have failed to create  labour demand and generate large numbers of jobs. In Lebanon, the labour market  has considerable deficits in the quality of work, underutilization of labour, and high  rates of informality. According to an ILO Diagnostics Assessment in 2020, “some 55  percent of all workers in Lebanon were informally employed in 2018–19, prior to the  COVID-19 crisis” (ILO, 2021).

The situation is bleaker amongst disadvantaged groups. A recently published survey  that was carried out in Lebanon by the ILO with support from the Ford Foundation  revealed significant rates of unemployment and informality among both displaced  populations and vulnerable host community members. Just 22.2 per cent of the  population surveyed reported formal employment, and notable differences emerged  between Lebanese and Syrian refugee respondents (ILO, 2021). Ninety-five per cent  of Syrians were in informal employment, while the figure was 64.3 per cent (still  considerably high) for vulnerable Lebanese. This was highest among youth of both  refugee and non-refugee backgrounds.¹

While the overall macroeconomic situation is less dire in Jordan, job-poor growth  and skills mismatches have manifested themselves in poor labour market outcomes,  particularly for youth. Despite extensive efforts by the government and international  community to address labour market challenges, youth unemployment has remained  persistently high and has even increased in recent years, reaching 37.3% (amongst  youth aged 15-24) compared to 30.9% in 2015 (ILO STAT, 2021).

It is well recognized that the vast majority of the world’s refugees are hosted in low  or middle-income countries. Jordan and Lebanon have two of the highest rates of  refugees per capita in the world (UNHCR, 2020). However, these countries also have  few resources at their disposal to provide for displaced persons, while also securing  adequate standards of living for citizens.

The concept of responsibility sharing is premised by the idea that the consequence  of geography should not dictate the load individual countries have to shoulder  in response to displacement crisis. This is traditionally seen in the allocation of  humanitarian assistance from countries in the global North, to those hosting larger  numbers of refugees. Nonetheless, internationally financed humanitarian assistance  to host countries has diminished as displacement crises have become protracted.  Instead, international investments have been increasingly redirected to spark  economic growth in the host countries. Agreements that provide concessional trade  and finance have been leveraged as such mechanisms. For example, the European  Union and Jordan leveraged the European Free Trade Agreement and relaxation of  the Rules of Origin to try to generate jobs for displaced persons by increasing export  opportunities.

However, the experience of the Rules of Origin scheme in Jordan demonstrated the  limitations of such indirect approaches to addressing displacement. The logic skips  the underlying macroeconomic weaknesses that determine job poor growth. Leaving  structural challenges aside, the impact of such investments remains limited. Without  tangible benefits – in this case job creation and export opportunities – perceptions  that international actors fail to meet the needs of host communities and live-up to  commitments are bound to persist.

Perceptions and Responses of Host Communities

Extensive research has been conducted in host countries to better understand the  impact of forced displacement on social cohesion. Higher rates of unemployment  have been found to be linked to lower levels of social cohesion. They also drive a lack  of trust among social groups, as well as perceptions of social injustice and exclusion  (ILO, UNDP, PMSO, World Bank, 2016). While Syrian refugees share cultural similarities  to their neighbors in Jordan and Lebanon, dwindling resources have generated social  tensions.

This is further reflected in the different responses between Jordan and Lebanon in  the EMM5-EuroMeSCo survey. Unsurprisingly, with the continuously worsening socioeconomic  situation in Lebanon and ensuing rise in both income and multidimensional  poverty reaching an unprecedented 74% and 82% in 2021, respectively (ESCWA, 2021),  Lebanese respondents were more likely to report the greatest challenge as meeting  basic needs. While no Jordanian respondents noted tensions with forcibly displaced  populations, 17% of Lebanese respondents reported this as a main challenge  (EMM5-EuroMeSCo, 2021).

Those from Jordan on the other hand assigned greater  importance to addressing broader socio-economic challenges. When asked what the  international community should specifically do, a respondent in Jordan placed value  on “interventions that help the livelihood of the communities and women in particular.”

The EMM5-EuroMeSCo survey also shows that host communities expect direct  support from the international community to boost their economies and support their  societies, but do not necessarily perceive that this has been sufficiently delivered.  Jordanian and Lebanese respondents acknowledged support provided specifically from the European Union, but for reasons of internal governance, spending had not  necessarily had an impact. This is particularly evident in the justifications provided by  Lebanese respondents, who see little capacity to receive and channel such support.  One Lebanese respondent noted that “chaos dominates,” and the “EU is lost among  the complicated Lebanese rules pertaining to refugees” (EMM5-EuroMeSCo, 2021).  The quality of jobs should also be at the forefront of discussion, as it has been an  issue of concern prior to the displacement crisis. Decent employment can provide  income and reduce stressors that risk creating an “us vs. them” scenario. One positive  example of enhancing decent work through investment in trade and development is  the explicit reference to the ILO in the relaxed Rules of Origin scheme. In this scenario,  ILO is responsible for monitoring and advising firms certified to export to the European  Union, to improve their compliance with decent work principles.

In conclusion, in the context of forced displacement and support to host countries,  foreign investments have increasingly been earmarked for economic growth.  While focus has shifted to a development perspective, and increasingly away from  a humanitarian approach, both have important roles to play. Humanitarian and  development stakeholders can work together to address pressing and immediate  needs, while equally investing in upstream, policy interventions that build a foundation  for longer-term change. Specifically, such interventions need to be grounded in broader  macroeconomic reforms and comprehensive national employment policies that  promote more diversified economies and create decent jobs for all in host countries.

Several new initiatives aimed to leverage the strengths of the humanitarian and  development sectors are starting to bear fruit in creating a more enabling environment  for sustainable livelihoods in displacement contexts. The PROSPECTS partnership,  spearheaded by the Government of the Netherlands, is one such example, that  brings together the International Finance Corporation (IFC), the ILO, the UN Refugee  Agency (UNHCR), the UN Children’s Fund (UNICEF), and the World Bank to devise  approaches for inclusive job creation, education and protection in the context of  forced displacement².

At the heart of the success of such initiatives lies the importance of responsiveness  to actual needs in the host countries, while ensuring that both vulnerable host  communities and refugees benefit from these interventions equally. Many other  examples of programmes implemented to operationalize the humanitarian- development- peace nexus (HDPN) exist, including in the Arab region.³ Improved  cohesion and solidarity occurs when communities of concern feel their voices are  heard, and needs addressed. The humanitarian sector cannot be absent in such  contexts, when acute needs require immediate responses, while development  actors provide insight to set countries on an inclusive and socially just development  trajectory.

1. 91.9 per cent for those 15-24, and 65.3 per cent for those 25 and above. Furthermore, an alarming 62.3 per cent of youth in the sample were
not in employment, education or training (NEET).
2. The PROSPECTS partnership is implemented across eight countries in the Middle East and North Africa (MENA) and the Horn of Africa.
3. One such mechanism introduced in the Arab region is the HDPN Issue Based Coalition (IBC) established in 2020 by the Regional UNDG
group. The main task of this IBC is to provide a platform for sharing research, tools, and experiences on the operationalization of the HDPN
in the Arab countries. One initiative that the HDPN IBC in Arab States is considering to pilot for its own members and later on for the broader
stakeholders is the global UN Development Assistance Committee (DAC) Dialogue Group Nexus Academy initiative.

INTERNATIONAL LABOUR ORGANIZATION (ILO) (2021). Assessing Informality and Vulnerability among Disadvantaged Groups in Lebanon: A Survey of Lebanese, and Syrian and Palestinian Refugees.
https://www.ilo.org/beirut/projects/WCMS_714581/lang–en/index.htm

ILO, UNDP, PBSO AND WORLD BANK (2016). Employment Programmes and Peace: A joint statement on an analytical framework, emerging principles for action and next steps. https://www.ilo.org/global/about-the-ilo/newsroom/statements-andspeeches/WCMS_535665/lang–en/index.htm