VI Dialogue and Action “The Mediterranean in Transition: What Agenda for the Future?”

The economic and financial crisis in which Europe is immersed requires a global dialogue. In this international context, the role of countries like Spain is fundamental to contribute positively with their work in the profound changes that the southern shore of the Mediterranean is experiencing.

One year after the outbreak of the “Arab uprisings”, it is a good time to reflect and analyze the framework in which the relationship between Europe and the southern Mediterranean is currently located and what steps have been taken by the agents involved. If we look at the situation of the North African countries in recent decades, it is easy to see the entry into the field of some actors who have been absent until now: those who took to the streets of the main cities in the southern Mediterranean; ordinary citizens. There are many causes that have led these people to rebel against their autocratic regimes, unable to react to the problems that affect the population of their countries: inequality, high levels of youth unemployment, fatigue due to political immobility or lack of freedoms.

This VI Dialogue and Action, under the heading “The Mediterranean in transformation: what agenda for the future?”, aims to be a space for reflections in this direction, from a constructive and optimistic perspective. It aims to analyze in a plural way the different points of view with experts, think tanks, businessmen, bankers, activists and young bloggers, whose contributions are the most valuable asset of this meeting, and always with the will that the ideas raised, conclusions and possible practical proposals are effective for the successful transformation of the Mediterranean. 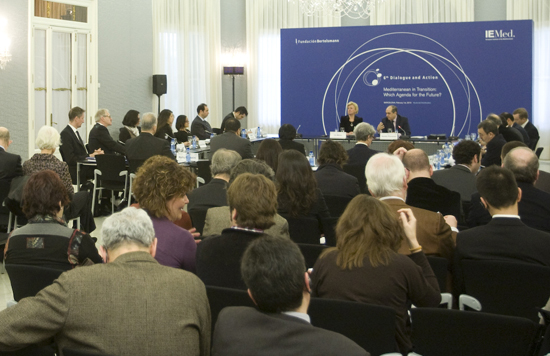