A meeting with local authorities and civil society representatives is held on March 2, 2019 to present the results of Mouwatinet’s advocacy campaign in 2017, aimed at highlighting the importance of applying specific measures so the gender parity law of 2017 becomes a reality. Gender mainstreaming in projects planning and budgeting is one of these measures.

The members of the municipal councils commit to implement administrative measures for a better gender mainstreaming in municipal programs, for example, by activating the National Plan of Institutionalization and gender mainstreaming, developed by the Peer Council for Equality and Equal Opportunities between Women and Men, established according to Decree 626 of 2016.

Following this meeting, a training of the ‘‘Equality and Eequivalence of Chances Commissions’’ of 10 municipal councils of Sfax Governorate is conducted on March 9, 2019 on gender mainstreaming in municipal projects’ planning and budgeting. Through hands-on exercises, elected officials strengthen their skills to effectively influence decision-making in terms of budget allocation for development projects. The training helps to build a partnership with the “Equality and Equivalence Commissions” and to prepare the members of these bodies to plan and implement gender-sensitive municipal actions, with techniques to eliminate gender-based discrimination in their work.

Thanks to this policy dialogue, Mouwatinet strengthens its communication capacities with local authorities and consolidates its reputation as an NGO. Mouwatinet also forms a coalition with local associations committed to participatory democracy in Sfax to coordinate efforts and ensure a sustained presence of civil society representatives in municipal commissions as monitoring and development bodies. This policy dialogue is one of the activities of the project CSO WINS, funded by the European Union and coordinated by the IEMed in synergy with the Euro-Mediterranean Women’s Foundation. 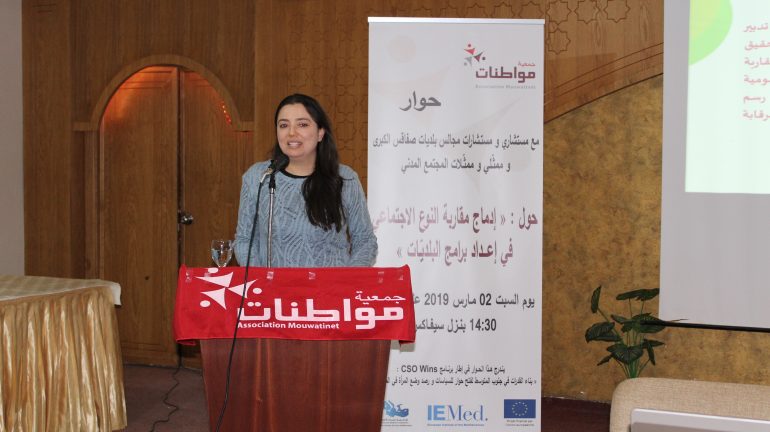