The “A Sea of Words” competition, in its 2011 call, is being held again with the intention of contributing to the promotion of dialogue between peoples, the exchange of knowledge and experiences between different local and international traditions. As part of the European Year of Volunteer Activities for the Promotion of Active Citizenship, the current edition of the competition will focus on a theme that values both the development of social solidarity and the consolidation of democracy.

The competition is aimed at the production of stories and narratives whose content is related to the creation, or consolidation, of dynamics aimed at promoting volunteering, a fundamental element of active citizenship that helps strengthen social cohesion and develops freedoms. and the values of democracy.

Literary production is a fundamental means of expressing and describing facts, ideas and emotions that can be directly transmitted to and by young people throughout the Euro-Mediterranean region. From this point of view, the aim is to obtain literary stories – based on both reality and purely fiction – that speak of different experiences of participation, citizenship and democracy.

This year’s international jury presents the first prize to the Moroccan Hanane Oulaillah-Jazouani, 30 years old and resident in Casablanca. His story “Le cadenas” (The padlock) explains the vicissitudes of the fiftieth anniversary of Khalid, who has been elected a member of a polling station, during the first democratic and clean election day in a country over 50 years of dictatorship of an autocrat named Ali. 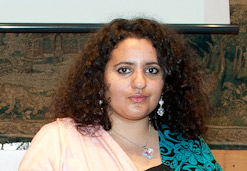